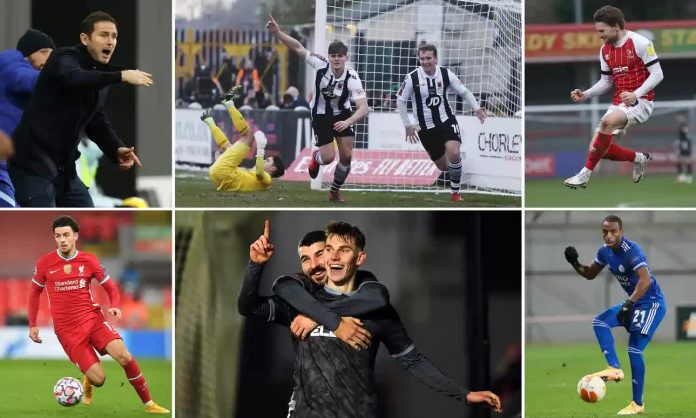 1 ) A question of line-ups for round’s big showdown

Last season’s fifth-round exit at the hands of Chelsea represented the furthest a Jürgen Klopp team had progressed in the FA Cup. He has been in England for more than five years but his attitude to the world’s oldest competition remains enigmatic at best, dismissive at worst. The biorhythms of a German season, including its winter break, continue to beat within him. Klopp has habitually blooded youngsters in the Cup, plus hardy perennials like James Milner. Last season, particularly in the third-round win at Everton, Curtis Jones announced his credentials and is likely to be granted a leading role at Old Trafford. Ole Gunnar Solskjær is more of an FA Cup traditionalist and can be expected to select a stronger team; his squad has been far less riven by injuries and fatigue than the opponent they drew 0-0 with last Sunday. United’s manager has fourth-round history with Liverpool; he scored a late 1999 winner that preluded future super-sub heroics but the time when these great rivals would throw the kitchen sink at each other in the Cup’s early rounds is sadly long passed. JB

2) Chorley waiting on a miracle as Wolves come to town

Wolves visit Chorley in far better shape than in 1986, when they had slumped as low as the fourth tier and were dealt a first-round hiding by the non-leaguers. A home victory would, this time, be one of the biggest cup shocks in living memory but Chorley hope the little details will be enough to put Nuno Espírito Santo’s men off their stride tonight. “Our advantages are small ones,” says their director of football and assistant manager Andy Preece. “The ground, the changing facilities, hopefully the weather, more the mental things that we’ll hopefully be able to get a little edge on.” You never know: while Chorley were not really underdogs when Derby’s youngsters visited in the third round, they did superbly to upset strong League One’s Peterborough and local rivals Wigan en route to this stage. “It will be a miracle if we can do it,” Preece says, and all everyone bar the nation’s old gold contingent will be rooting for them. NA

An FA Cup run will not save Frank Lampard. There are increasingly few guarantees that he will be the Chelsea manager come the final. After a drab performance and defeat at Leicester dropped his team to eighth in the Premier League, another against Luton at Stamford Bridge would almost certainly doom him. And defeating a mid-table Championship team will do little to augment Lampard’s rapidly fading cachet. His status as a great Chelsea player no longer shields his struggles with a squad on which £222m was spent last summer. Lampard is likely to hand Billy Gilmour, a big hit in last season’s competition, a starting role in midfield. Sunday will be the two clubs’ first meeting since the 1994 semi-final at Wembley. Nathan Jones, the Luton manager, made nine changes when beating Reading in the previous round, but with his team nine points off a play-off position and 11 clear of relegation, he has the bandwidth to play something akin to a first-choice team and perhaps seal Lampard’s fate. JB

4) Wednesday out to avenge 55 years of hurt

Poor Sheffield Wednesday. This season they’ve had to cope with a points deduction, a Covid outbreak and a serious case of Pulisball; and the threat of relegation from the Championship means they can’t even take much joy from Sheffield United’s Premier League misery. Perhaps Sunday’s FA Cup joust with Everton is a chance for their fans to cast their minds back to happier times? Like the undisputed footballing highlight of 1966 at Wembley, where Wednesday took on an Everton side that had not conceded a goal in the entire tournament and promptly swaggered into a 2-0 lead. OK, so Everton stormed back and won 3-2 but Wednesday performed so valiantly they became the first FA Cup finalists to do a lap of honour, by popular demand. Wednesday have fallen to Everton several more times in the Cup since then, including in 1988, when three consecutive 1-1 draws teed up a dramatic third replay. Which Everton won 5-0. Oh, Wednesday. Still, 55 years of FA Cup has to end some time, right? PD

Over Christmas, Arsenal rediscovered themselves. Their revival from what briefly appeared a terminal situation for Mikel Arteta reminds of the oscillations a young manager with a young squad can go through. Perhaps Lampard might take heart from his London rival’s sudden recovery. A mid-table position and heavy traffic ahead in the battle for a top-four position has given Arteta something of a free rein to defend the trophy. Southampton, a place above Arsenal in ninth, are another who might fancy a go at chasing silverware. It would be their first since winning this competition in 1976. Ralph Hasenhüttl was twice an Austrian Cup winner as a player, and said before the third round that he wanted to go “as far as possible” in the competition. Saints may again have to do without Danny Ings, who is returning from testing positive for Covid-19 and has been linked with a move away. Hasenhüttl, unafraid to express his own ambitions, has suggested Ings can find success on the south coast if he stays and fights on. JB

It may be a season with an unprecedented workload but Pep Guardiola has fielded very strong line-ups in every competition this season so Cheltenham, sixth in League Two, can look forward to pitting their wits against many of the players who have got Manchester City on a nine-match winning streak in all competitions. Owing to Covid-19 restrictions, City will have to get changed in a bar at Whaddon Road, aka the Jonny-Rocks Stadium, but it will take more than that to knock them out of their groove. “We have a long throw [taker] and we have people good in the air in terms of set plays,” said the Cheltenham manager, Michael Duff, as he reached for hope. “But the key is can you get a throw in their half to start with? We’ll do our work, do everything we can to make it as difficult as possible and you never know.” PD

Given Sheffield United look nailed on for relegation, there would be little harm in going full tilt at FA Cup glory. Perhaps a strong run could even set them up for a rally in the league but, either way, they have been handed the kindest of passages to the quarter-finals should they choose to exploit it. Should they overcome League One Plymouth, a home tie against Millwall or Bristol City awaits in the last 16. It would seem a shame if Wilder opted to make too many changes given such a clear route to the competition’s business end. At their best, United’s tempo makes them look every inch a cup team: for all their toils in the league, could they channel the spirit of Wigan’s 2013 success and pull out a season to remember? NA

Leicester won the last-ever FA Cup tie at Griffin Park and now, a year later, they travel to Brentford’s new stadium in search of another win. It will be interesting to see whether Brendan Rodgers picks a side as strong as the one that trounced Stoke in the last round, as Leicester face a Premier League clash with Everton three days later. This seems an ideal opportunity to rest the outstanding James Justin and give a long-awaited domestic start to Ricardo Pereira, who came off the bench to make a welcome return in Tuesday’s exhilarating win over Chelsea. Brentford beat four Premier League teams in this season’s Carabao Cup before losing in the semi-final to Spurs, but will be without their suspended striker Ivan Toney for this tie. That may be no bad thing, as it means he should be available for Wednesday’s match against Swansea, one of only two teams above them in the Championship. PD

Swansea have already beaten Nottingham Forest once this week, when the Aston Villa midfielder Conor Hourihane chose Steve Cooper’s promotion-chasers over Chris Hughton’s Forest, hovering above the relegation zone. Since taking over in October, Hughton has made his team predictable hard to beat; last weekend’s loss to Middlesbrough was their first in seven matches. Swansea climbed to second with last week’s win at Barnsley, while Cooper has been complaining about his team’s scheduling and travel time when compared to promotion rivals. In the previous round at Stevenage, he made wholesale changes, and that included the return of Wayne Routledge, 10 years a Swan, who scored the first goal. “He’s part of the fabric and I can’t imagine not coming into training and seeing him,” said Cooper of the 36-year-old, who seems likely to be given another spin as both managers look to rest their regulars. JB

10) Will Wycombe be Alli’s final game in a Spurs shirt?

Will Dele Alli’s Tottenham swansong take place at an empty Adams Park on Monday night? It would be no way to go but his future remains up in the air and, for now, the FA Cup presents his best to publicly influence its direction. Any progress Alli might have thought he made in applying himself admirably at Marine dissipated when, after warming the bench against Fulham, he disappeared from the matchday squad altogether for the win at Bramall Lane last Sunday. After that game José Mourinho seemed, for those reading between the lines, to suggest Tanguy Ndombele was an example for Alli to follow in battling back from non-selection. Perhaps the road back will begin with Wycombe, who Alli scored against in a dramatic cup tie four years ago, but with suggestions of a reunion with Mauricio Pochettino at PSG still hanging in the air it is hard not to think a break might be in the best interests of all parties at this stage. NA