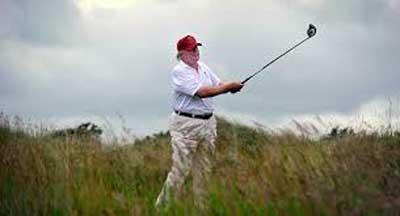 The caption alongside the tweet calls for revenge on those who ordered the murder of General Qasem Soleimani, and says that it will be taken at the “right time.”

Iran’s Tasnim News Agency has tweeted a doctored image of Donald Trump playing golf in the shadow of an American B-2 strategic stealth bomber.

The Tweet reads “Revenge is inevitable,” a quote apparently taken from a remark made by Iran’s Supreme Leader Ayatollah Ali Khamenei in December, when he vowed avenge the life of top military commander General Qasem Soleimani.

Soleimani was killed in a drone attack on his convoy at Baghdad International Airport on 3 January 2020, on the order of US President Donald Trump. This led to a major escalation in tensions between Washington and Tehran. In retaliation, Iran attacked US military facilities in Iraq.

@jack is this ok?

Guess this isn’t worthy of a ban right @jack?

The hypocrisy of Twitter and #JackDorsey regarding hate speech for those he agrees with is so telling… @RealCandaceO pic.twitter.com/q0hxv5S5UE

​Twitter was the first social media platform to ban Donald Trump in the wake of the events that rocked the US Capitol on 6 January, saying he violated its rules by “inciting violence.” He denounced the violence and told his supporters to leave the area.

Trump was an avid Twitter user before being blacklisted, regularly posting claims that the US elections were fraudulent, while also slamming his political rivals.