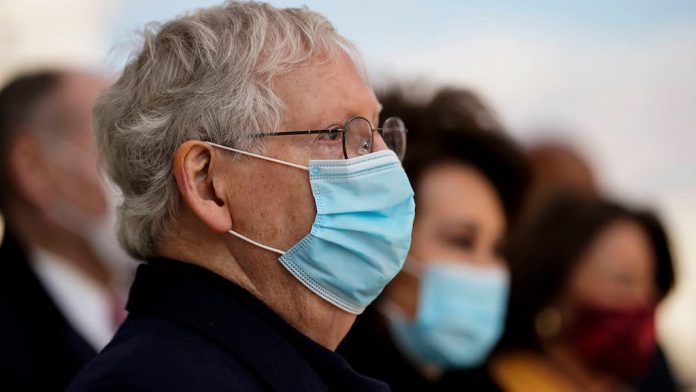 McConnell: The president ‘does not owe his election to the far left’

Just one day after President Biden spoke of unity in his inaugural address to the nation, Senate Minority Leader Mitch McConnell says the Democrat president has headed in “the wrong direction.”

Speaking from the Senate floor Thursday, the Kentucky Republican condemned several executive actions Biden took on his first day in office, including revoking a key permit for the Keystone Pipeline XL, rejoining the Paris climate agreement and removing a Trump-appointed general counsel to the National Labor Relations Board.

“On the Biden administration’s very first day, it took several big steps in the wrong direction,” McConnell said, adding that there is time for Biden to “remember that he does not owe his election to the far left.”

Republicans have taken issue with the Paris climate agreement, an international accord joined by nearly 200 nations with the intent of lowering greenhouse gas emissions and reversing the human impact on climate change.

But GOP officials claim the agreement – which President Trump almost immediately pulled the U.S. out of after taking office in 2017 – will impact manufacturing jobs and unfairly hold the U.S. to an environmental standard not met by China or India.

McConnell, along with other congressional GOP members, has similarly taken issue with Biden’s decision to kill the Keystone Pipeline XL.

Environmentalist and Native American tribes have taken issue with the 1,200-mile pipeline since 2004, as it draws oil from tar sands and crosses tribal territory.

Conservatives believe that the move will negatively impact the oil and gas industry, along with employment in the sector.

Biden’s climate-forward initiatives signify the strong stance his administration will take on tackling climate change in the U.S. and making policy changes that will target environmentally-conscious strategies.

But McConnell also reminded Biden and the slim Democratic Senate majority that Americans voted to keep a split Senate, with 50 Republicans and 50 Democrats, which means Republicans intend to challenge policies they believe will have negative impacts on their constituents.

“If and when our Democratic friends depart from common sense, when they retreat from common ground, when their proposals would harm the common good – then we’ll use the power the American people have given us to push for what is right,” the minority leader said from the floor.

Some congressional Democrats have discussed removing the filibuster, a move McConnell urged senators to rethink. Keeping the filibuster as a political tool means Democrats would have to garner at least 10 Republican votes to get most legislation passed through the upper chamber – a challenge that could prove difficult with liberal agendas.

“The president can and should refocus his administration on creating good-paying American jobs, not sacrificing our people’s livelihoods to liberal symbolism,” McConnell said.