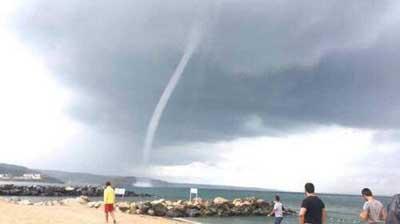 The year 2020 hit an all-time record in Turkey for witnessing the most extreme weather incidents, with 984 cases of flood, hail, heavy precipitation and storms.

According to the state-run Anadolu Agency’s report compiled from Turkish State Meteorological Service’s data, the average temperature in Turkey throughout 2020 was 14.9 degrees Celsius, which is 1.4 degrees Celsius more than 2019’s average.

“The year 2020 was the third hottest year since 1971,” the state-run Anadolu Agency said, adding that the average temperature was below seasonal norms only in April last year.

The hottest temperature anomaly was observed in September and October 2020, with a 3.4 and 3.2 degree Celsius difference, respectively. Both were the hottest months ever recorded in the last 50 years, according to the report.

February, March, May and June were the only months where rainfall and snow were above seasonal norms.

Due to climate change, Turkey witnessed 984 extreme weather incidents in 2020, the highest number of all time.

The rest of the extreme events recorded were of lightninging with 7 percent, snow with 5 percent, landslide and frost with 2 percent and avalanches, sandstorms and fog with 1 percent.