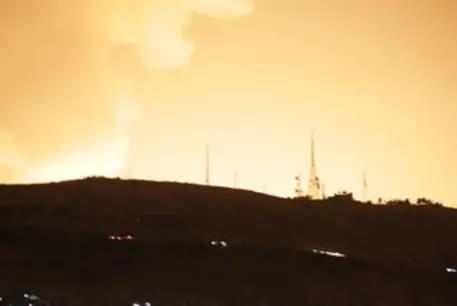 The attack is the first one attributed to Israel to take place under President Joe Biden’s administration.

Airstrike in Syria 370
(photo credit: Courtesy of Facebook)
Syrian air defense systems responded to an alleged Israeli airstrike in the city of Hama in north-western Syria, according to SANA.
At roughly 4:00 a.m. an alleged Israeli airstrike from the direction of Tripoli in Lebanon targeted sites in the Hama Governorate, a military source told SANA.
The report added that the Syrian air defense systems had managed to intercept most of the missiles, but did not indicate what sites were targeted or whether any damage was done.
Loud explosions were reportedly heard in the area.
The alleged attack is the latest one in a row of similar attacks attributed to Israel. The last one was reported last week, when airstrikes, allegedly carried out by Israel, targeted dozens of sites in the Deir al-Zor region of eastern Syria and in Albukamal near the Syria-Iraq border, leading to between 25-50 casualties.
And two weeks earlier, an attack attributed to Israel targeted areas in north-western Syria near the city of Masyaf, mainly damaging a munitions factory in Masyaf, which primarily produced missile engines, rockets and warheads.
According to local Syrian reports, Israel tried to use the last remaining days of President Donald Trump and Secretary of State Mike Pompeo in office to intensify its attacks on Iranian operatives situated in Syria.
This attack is the first one attributed to Israel to take place under President Joe Biden’s administration.