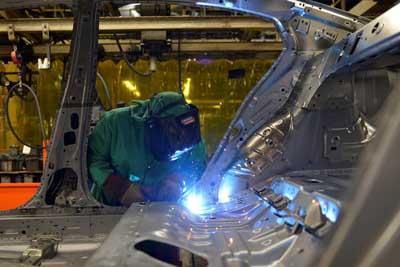 WASHINGTON (Reuters) – U.S. manufacturing activity surged to its highest level in more than 13-1/2-years in early January amid strong growth in new orders, but bottlenecks in the supply chain caused by the COVID-19 pandemic are driving up prices and signaling a rise in inflation in the months ahead.

Data firm IHS Markit said on Friday its flash U.S. manufacturing PMI accelerated to a reading of 59.1 in the first half of this month, the highest since May 2007, from 57.1 in December. Economists had forecast the index slipping to 56.5 in early January.

A reading above 50 indicates growth in manufacturing, which accounts for 11.9% of the U.S. economy. Manufacturing is being supported by businesses rebuilding inventories and a shift in demand towards goods from services because of the coronavirus crisis. Factories and the housing market are anchoring the economy as it battles a resurgence in the virus.

The IHS Markit survey’s measure of new orders received by factories raced to its highest level since September 2014. The surge in demand reflected both existing and new customers, “with some clients reportedly committing to orders previously placed on hold.”

But the pandemic is gumming up the supply chain, leading to higher prices for materials.

Manufacturers are also raising prices for their products. The survey’s gauge of prices received by factories vaulted to its highest level since July 2008. This mirrored other manufacturing surveys, suggesting inflation could pick up and remain elevated beyond the anticipated boost from the drop of weak readings in March and April from the calculation.

With orders soaring, manufacturers hired more workers early this month. The survey’s factory employment index increased to 54.8 from 52.2 in December.

The strength in manufacturing helped to lift business activity. The survey’s flash composite PMI Output Index, which tracks the manufacturing and services sectors, rose to a reading of 58.0 early this month from 55.3 in December. While its flash services sector PMI increased to 57.5 from 54.8 in December, the pace of new business growth softened at the start of 2021.

The services sector, which accounts for more than two-thirds of U.S. economic activity, has borne the brunt of the pandemic, with severe disruptions to restaurants, bars and other businesses that attract crowds. COVID-19 has infected more than 24 million people, with the death toll exceeding 400,000 since the pandemic started in the United States.

The survey’s measure of services industry employment fell to a six-month low in early January.