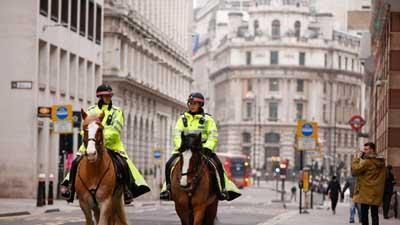 The British environment minister has warned that additional measures may be necessary to combat lockdown fatigue and those guilty of repeatedly breaking Covid-19 restrictions as the government dismisses relaxing rules.

Speaking on Friday, Environment Secretary George Eustice said the government wants to be “straight” with people, adding that the current lockdown measures won’t be reduced until case numbers start to fall and all vulnerable groups have received a vaccine.

Eustice was asked whether there was any truth to reports that police could be given access to health data to crack down on quarantine breaches.

“Generally, with this whole pandemic, we’ve had to take some quite extraordinary steps, very draconian steps, that are a big infringement on people’s liberty,” the minister responded.

“And yes, that does mean that we have to intervene in quite a draconian way and issue penalties, and we make no apology for doing that.”

Eustice further highlighted the gravity of the situation, adding that other measures were “under review,” including completely closing the borders to foreign visitors.

“None of us want these restrictions to stay in place a moment longer, but we are in a very serious position… there is pressure on the NHS and we need everyone to play their part, to abide by the restrictions to limit the spread of this virus.”

Lockdowns are currently in place across the UK after a highly contagious strain of Covid-19 was found to be responsible for increasing infection rates.

Ministers have repeated that measures could be introduced if the country hits its inoculation targets. On Thursday, Health Secretary Matt Hancock rejoiced as the health services administered their five millionth vaccine.