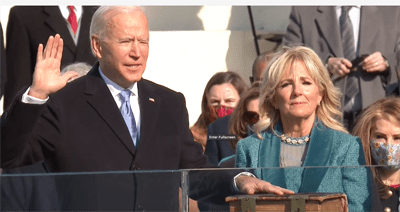 At the heavily guarded US Capitol, Joe Biden was sworn in as the 46th president of the US. During his inaugural address, he mentioned “unity” at least 8 times, though he admitted that unity sounds like a “foolish fantasy,” and vowed to bring the country out of its historical crisis and challenge.

The speech was hailed by a large swath of Americans on Twitter, who believe a new era has begun and the new president is the cure to the dilemma the country is being confronted with.

“I can breathe. I feel hope,” one netizen tweeted, saying Biden is the lighthouse which will end the darkest chapter of the country’s history and lead them toward a new life.

Analysts believe Biden’s speech sent a message that US domestic issues, such as tackling the epidemic, economy and racial equality, are on top of his agenda as the country’s biggest problem is at home, rather than abroad. They argue that he might make a difference in fighting COVID-19, but he does not have the magic wand to cure social divisions in the US.

“Hear me clearly: Disagreement must not lead to disunion,” he said in his inaugural speech. The word “disunion” caught the attention of US media outlets, with The New York Times calling it “startling” to hear from an US president in the post-Civil War era.

Biden noted the US needs all its strength to persevere through this “dark winter.” “The battle is perennial. Victory is never assured.” This rhetoric is taken by observers as the seriousness of the ongoing discord in the US as Biden sees it.

Biden articulated in his speech, “We must end this uncivil war that pits red against blue, rural vs. urban, conservative vs. liberal.”

Martin Jacques, who is a visiting professor at the Institute of Modern International Relations of Tsinghua University and a senior fellow at the China Institute of Fudan University, told Global Times that just because Donald Trump has gone doesn’t mean that American politics has changed profoundly. “We are now in new territory. The country is hopelessly divided.”

Reining in the COVID-19 in the US is the most pressing task for Biden right after assuming office, observers believe. On the eve of his inauguration, the US coronavirus death toll surpassed 400,000.

On his first day in office, Biden took a range of executive actions, including implementing a national mask mandate on federal property and launching a “100 Days Masking Challenge” to encourage Americans to wear facial masks. Yet observers said it is far from enough to carry out the mandate only on federal property, instead of in all public places, noting there is opposition to his appeal. On Twitter, many netizens said “a president cannot tell states or cities what to do” and such comment has been increasing since his inauguration.

Prior to his inauguration, Biden has unveiled a $1.9 trillion COVID-19 economic and health care relief proposal, but drawn objections from some Republicans for being too broad and expensive.

This is why he called for unity, experts noted. Cui Liru, a senior fellow of the Taihe Institute and former president of China Institutes of Contemporary International Relations, told the Global Times on Thursday that if Biden hopes to promote his proposals and executive orders efficiently, be it handling the virus or saving the US economy, unity is the prerequisite.

“The new administration will need to overcome differences among groups and forces, and encourage them to reach a certain degree of compromise,” he said. If Americans still stick to their polarized stances, like before, and fight fiercely over issues including whether one should wear a facial mask, they will all end up becoming the victim, Cui said.

A divided US is one of the biggest challenges Biden inherits from Trump, observers noted.

During the 2020 presidential elections, more than 74 million people, about 47 percent of the electorate, voted to reelect Trump. Political violence is also on the rise. The Capitol riots ended not only with blood on the floor of Washington, the loss of five Americans lives, but a more divided US.

According to an Economist/YouGov poll conducted in January, 67 percent believe that the Capitol riots divided Americans even further, and only 14 percent believe the country is headed in the right direction, the lowest percentage since the summer of 2011, YouGov reported.

On December 12, 2020, just two days before the Electoral College’s vote confirming Biden’s presidential victory, Proud Boys, a far-right political organization, clashed with Antifa, a far-left activist movement in Washington DC. Photos of protesters shoving, pushing each other, with some injured made the headlines on mainstream media. Twitter users were flooding the #ProudBoys hashtag on social media. On Change.org, a US-based petition website, more than 457,613 people  have signed to support declaring the Proud Boys a terrorist organization as of Thursday.

In the US, the marriage gap is bigger than ever. As early as in 2017, a US-based research company, Wakefield Research, found that 29 percent of Americans viewed the political climate as a cause of tensions with their partners. In 2020, “only three percent of all American adults were married to an individual from the opposing party,” US-based website Voter Study Group reported in August.

Trump leaves America at its most divided since the Civil War, a growing number of US media outlets said.

“The reason why the US has reached this impasse has been long in the making: huge inequality and debilitating polarization. Biden has no chance to tackle the inequality that lies at the heart of America’s problems,” said Jacques.

Experts also noted that due to growing inequality, populism is on the rise in the US, which has polarized US society into an elite with highly paid, secure jobs on one side, and growing numbers of grass roots, including middle class, in insecure, poorly paid work on the other.

As early as November 2016, right after Trump was elected president, US political scientist Francis Fukuyama published an article saying, “We appear to be entering a new age of populist nationalism.” In the following four years, a growing number of analysts touched upon why populism had helped crown Trump, and how the latter, in turn, won himself more less-educated working-class voters by hyping their anti-elite sentiment.

On Monday, Fukuyama published an article on Foreign Affairs magazine. The scholar, who once believed liberal democracy was the end of history, argues that US politics is “rotten to the core.” In the commentary, Fukuyama said apart from political infighting, the US government is still beholden to powerful elite groups that distort policy to their own benefits and undermine the legitimacy of the regime as a whole. “And the system is still too rigid to reform itself,” he remarked.

Yanis Varoufakis, a Greek economics professor, voiced his doubt on whether Biden can address the issues of inequality and wealth gap in the US, because Biden is a “representative of a ruling class that fueled Trumpism.”

Will Biden turn the tables? Experts believe he will make a difference compared with Trump.

“He has immediately addressed Trump’s failures with the pandemic and the economy,” Jon R. Taylor, a professor and chair of the Department of Political Science and Geography of University of Texas at San Antonio, told Global Times on Wednesday.

Graham Allison, Douglas Dillon Professor of Government at Harvard University and the author of Destined for War: Can America and China Escape Thucydides’s Trap? believes the US is fortunate because “Biden understands in his bones that his first job will be to reunite America. Biden appreciates Lincoln’s profound insight when he said that ‘A house divided against itself cannot stand.'”

Although the US faced a severe stress test in transferring power from a powerful incumbent to his opponent, the system worked. It bent, but didn’t break, Allison said in an email interview with Global Times on Wednesday.

In Biden’s inaugural address, he did not mention Trump, not even one time, which grabbed eyes of the experts who believe it may convey a signal that he is offering an olive branch to his opponents and asking them to help serve the greater good of the country.

Still, it does not mean there will be no obstacles. Cui of the Taihe Institute said it remains to be seen whether Biden will be able to use the Democratic Party’s majority in Congress to boost political reconciliation and unity.

The view was echoed by Jacques, who said, “The great majority of Republicans believe that the election was fraudulent, as well as 147 members of Congress. The next four years will see a bitter battle in Congress, on the streets and in social media, between two parties and two social blocs that have barely anything in common.” And the result is “in four years’ time, Trump or someone like him will stand for president and could well win.”

Whatever disruptions Trump had left for Biden, be it bipartisan struggle, social inequality or populism, those are huge wounds in US society, which take time to heal, Cui said.