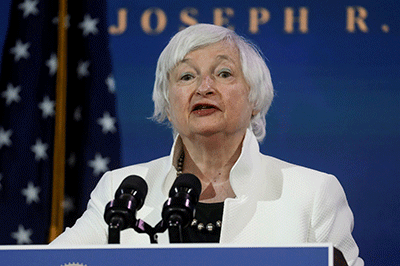 Yellen, who would be the first woman to head Treasury after breaking that same barrier as Federal Reserve chair from 2014 to 2018, is highly regarded by both her fellow Democrats and by Republicans. The vote two days after Biden became president is quick by recent standards.

Friday’s vote on Yellen’s nomination may reveal the level of Republican opposition to the Democratic president’s plans, for which he is seeking bipartisan support.

Already some Republicans are expressing concerns over its price tag and increased debt in a return to fiscal conservatism after running up deficits with the 2017 tax cuts and nearly $5 trillion in coronavirus spending last year under former Republican President Donald Trump.

Yellen’s Republican predecessor, Steven Mnuchin, was not confirmed until three weeks after Trump’s inauguration, and then by a 53-47 nearly party-line vote in a Republican-controlled Senate.

The committee vote is scheduled for 10 a.m. (1500 GMT) and Senate aides said it could pave the way for a full Senate confirmation vote later in the day on Friday.

Yellen’s confirmation hearing on Tuesday highlighted some Republican lawmakers’ concerns about her role in executing Biden’s economic policies, including a bigger federal debt burden and repealing parts of their signature 2017 tax cuts.

Her remarks represent a new attitude toward government debt among some economists and policy-makers: Focus on the interest rate being paid and the returns it will generate, rather than the overall amount borrowed. In recent months, Treasury’s interest outlays have fallen from pre-pandemic levels due to lower rates.

Outside partisan factors could cast a shadow over the confirmation vote, including the pending impeachment trial of Trump and an ethics complaint against Republican Senators Josh Hawley and Ted Cruz over their objections to Biden’s Nov. 3 election victory even after pro-Trump rioters stormed the U.S. Capitol on Jan. 6.