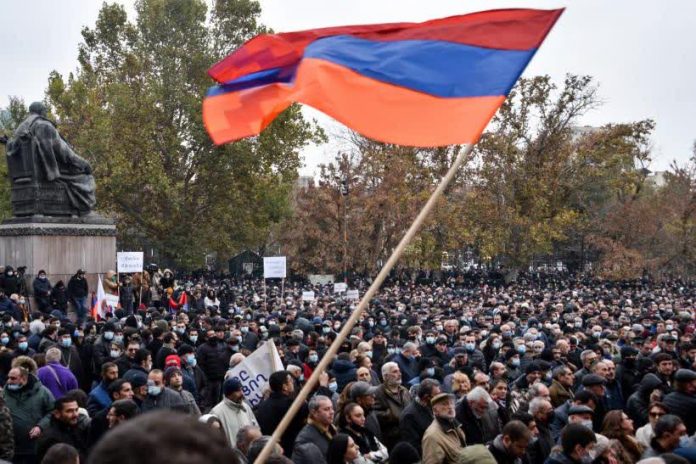 In the recent conflict between our two nations, Armenia and Azerbaijan, the diplomatic hand of the West has been conspicuously absent. Tellingly, the first talks between our respective leaders since the November ceasefire took place with one other person in the room – President Vladimir Putin.

President Joe Biden has stated a resolve to change this, chiding the Trump administration’s passivity during the conflict. Yet others may question why it’s necessary, given America’s geographical remoteness from the South Caucasus. Is it perhaps not preferable for Russia to lead peace efforts?

Given the entanglement of NATO in the region, and the risk – were these efforts to fail – of regional conflagration at the junction of Europe and the Middle East, the U.S. cannot let events unfurl. Given limited progress in recent talks, the ceasefire shall remain fragile because it doesn’t provide for reconciliation between our communities, the fundament for lasting peace. Rather, economic engagement – between the nations, its peoples and from the West – holds that promise.

This is not to say acrimony simply dissolves in prosperity. History has shown us that arguments for a peace dividend are no match for the emotion of nationalist rhetoric. Yet in affording a mechanism for exchange where contact can be established, reconciliation between Armenians and Azerbaijanis can find some purchase. Because it is a lack of connection we must first resolve.

Where once we used to live as neighbors, our communities now know nothing of the other. During the 1990s conflict over Nagorno-Karabakh – the region at the heart of the dispute – approximately one million of our peoples became refugees. Azerbaijanis fled Armenia and vice versa. Hundreds of thousands of Azerbaijanis were forced to leave Karabakh. Then an impassable border fell. Segregated, fear and mistrust of the other grew. Seeping into our national psyches, it bound our identities against the enemy across the border.

National identity may not be negotiable, but the price of tomatoes is. It therefore makes an easy starting point: a human-level contact to begin demystifying the fog between us; stripping existential anxiety of the other for trust. Where nationalists may blather about incompatibility, Azerbaijanis and Armenians trading would be its living refutation.

But for this, we must live together once again. The recent conflict caused many Armenians to flee Karabakh, tragically mirroring events of the 1990s. Now they must be encouraged to return, as should Azerbaijanis, through economic incentives – whatever form (tax benefits, business grants or subsidies) this may take. For many, at first, this will not be enough: The wounds of the conflict remain raw. However, for others, it will: all that is needed for drip-drip-drip of reconciliation to begin, and the path to be lit for others to feel safe in following.

Further illumination can flow from initiatives that actively encourage partnership. Seed money, for instance, could be provided for joint enterprises between Azerbaijanis and Armenians to start businesses together. Schemes like this that bake in collaboration can reveal what a future together holds.

We need not wait for the final details of a negotiated peace deal to begin. Indeed, the longer it takes the benefits of peace to flow, the more precarious it shall become. Conversely, tangible economic development can give people a vested interest in supporting political compromise, making it easier for the governments to sell to their respective domestic audiences. Though economics is never sufficient for peace, in this way it can strengthen processes towards settlement.

It also paves the way for an incremental renormalization of relations between our two nations. Peace must be girded on mutual economic dependence, as France and Germany demonstrated with the establishment of the European Coal and Steel Community in the wake of the Second World War. The force of logic is even stronger today: It makes no sense to deepen integration in the global marketplace whilst ignoring our closest neighbor.

Though the West may feel side-lined, it can deploy its tools of soft power to encourage these kinds of initiatives. In addition, its governments could open the door to private industry to bring investment to bear on the much-needed reconstruction of infrastructure that – in providing immediate jobs and a platform for opportunity – will help cement the peace.

Many of these things will no doubt need to happen in concert with the two leading major peace brokers– Turkey and Russia. Whilst some in the West may not relish this prospect, it is what the situation demands if stability is our ambition. Biden appears reconciled to these compromises, as his commitment to re-join the Iranian Nuclear deal alongside Moscow and renew the Russian-U.S. nuclear treaty later in January suggest.

The opportunity, therefore, must now be grasped. Reconciliation founded on economic exchange is the ultimate means for a durable peace between Armenia and Azerbaijan. At the same time, it offers the West an opportunity to re-establish its influence and shape events in the region. As the economic lingo goes, that’s a ‘win-win’.