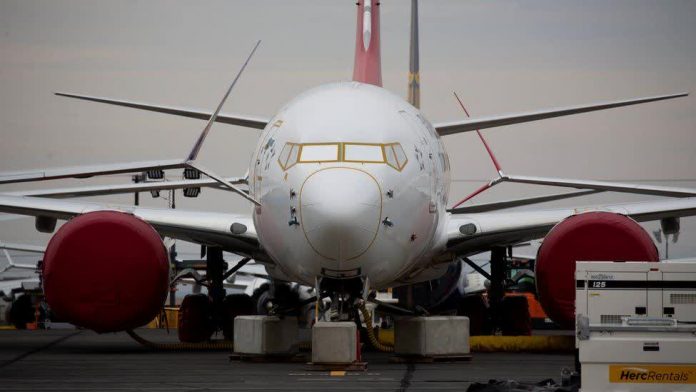 A former senior manager at Boeing’s 737 plant in Seattle has raised new concerns over the safety of the company’s 737 Max.

The aircraft, which was grounded after two accidents in which 346 people died, has already been cleared to resume flights in North America and Brazil, and is expected to gain approval in Europe this week.

But in a new report, Ed Pierson claims that further investigation of electrical issues and production quality problems at the 737 factory is badly needed.

Regulators in the US and Europe insist their reviews have been thorough, and that the 737 Max aircraft is now safe.

In his report, Mr Pierson claims that regulators and investigators have largely ignored factors, which he believes, may have played a direct role in the accidents.

He explicitly links them to conditions at the company’s factory in Renton, near Seattle at the time. Boeing says this is unfounded.

Investigators believe both accidents were triggered by the failure of a single sensor. It sent inaccurate data to a piece of flight control software, called MCAS.

This automated system then repeatedly forced the nose of the aircraft downwards, when the pilots were trying to gain height. Ultimately each aircraft was pushed into an unrecoverable dive.

Efforts to make the 737 Max safe have focused on redesigning the MCAS software, and ensuring it can no longer be triggered by a single sensor failure.

For Ed Pierson, this does not go nearly far enough. A US Navy veteran, who had a senior role on the 737 production line from 2015-2018, he was a star witness during congressional hearings into the disasters involving the Max.

He told lawmakers he had become so concerned about conditions at the factory, he had told his bosses that he was hesitant about taking his own family on a Boeing plane.

He testified that during 2018, the factory was in a “chaotic” and “dysfunctional” state as, he claimed, staff there struggled under pressure from managers to build new planes as quickly as possible.

Now, he is worried that these issues have been overlooked in the rush to get the 737 Max back in the air.

His report draws on material from the official investigations. It claims that both of the crashed aircraft suffered from – what he believes – were production defects, almost from the moment they entered service.

These included intermittent flight control system problems and electrical anomalies that occurred in the days and weeks before the accidents.

He claims these may have been symptoms of flaws in the aircrafts’ highly complex wiring systems, which could have contributed to the erroneous deployment of MCAS.

He also points out that sensor failures contributed to both accidents and asks why such failures were happening on brand new machines.

In the case of the Lion Air plane, a faulty sensor was replaced with another part that was not properly calibrated.

All signs, Mr Pierson says, “point back to where these airplanes were produced, the 737 factory”.

However, he insists that the possibility of production defects playing a role in the accidents has not been addressed by regulators.

He claims this could lead to further tragedies, involving the Max or even a previous version of the 737.

Best known as “Sully”, one of the pilots who safely ditched a crippled and engineless Airbus plane in the Hudson river off Manhattan in 2009, he too believes that modifications to the Max do not go far enough.

He believes changes are needed to warning systems aboard the plane, which were carried over from a previous version of the 737 and are “not up to modern standards”.

“Ed Pierson’s report is very disturbing, about manufacturing issues in the Boeing factories that go well beyond just the Max, and also affect… the previous version of the 737,” says Capt Sullenberger.

“There are many critically important unanswered questions that must be answered.

“Boeing and the Federal Aviation Administration (FAA) must finally become more transparent, and begin to provide information and data, so that independent experts can determine the worthiness of the work that’s been done.”

The BBC has also spoken to a former senior inspector with the UK’s Air Accident Investigations Branch (AAIB), who now works as a safety specialist. He warns that Mr Pierson’s findings should be viewed in a wider context.

The report, he says, does make some “valid observations” about the pressures on Boeing’s production line and quality control, and concerns about specific components.

However, he adds that “taking the limited information in any accident report… and making fresh interpretations of it, is not the same as conducting a new investigation”.

The issues highlighted, he adds, “may have been investigated and dismissed already, for good reason”.

The FAA, meanwhile, insists it only approved the return to service of the Max, following a “comprehensive and methodical safety review process”.

It adds: “None of the many investigations of the two accidents produced evidence that a production flaw played a role”, and emphasises that “every aircraft leaving the factory is inspected by a team of FAA inspectors before it is cleared for delivery”.

Boeing itself will not comment on whether the electrical and flight control problems highlighted by Mr Pierson may have played a factor in the two accidents, on the grounds that this is a matter for the investigating authorities.

It has, however, described suggestions of any link between conditions at Renton and the two accidents as “completely unfounded”, emphasising that none of the authorities investigating the crashes has found any such link.

Patrick Ky, the head of Europe’s aviation safety agency, EASA, has previously told the BBC he is “certain” the plane is safe to fly.

But relatives of those who died aboard ET302 are continuing to urge the agency not to allow the 737 Max to operate in Europe, “until continuing concerns about the aircraft’s safety have been fully and openly addressed”.