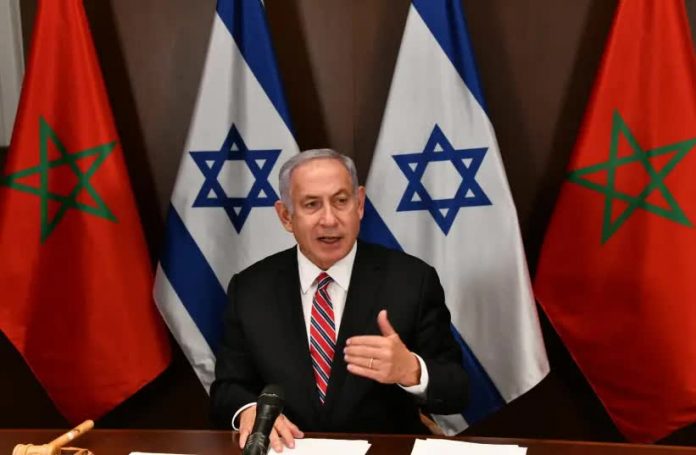 Morocco has enjoyed bilateral benefits from Washington with US recognition of its sovereignty over Western Sahara.

Prime Minister Benjamin Netanyahu and the government’s cabinet formalizes the normalization agreement with Morocco.
(photo credit: CHAIM TZACH/GPO)
The cabinet approved Israel’s normalization agreement with Morocco in a unanimous vote on Sunday.
Prime Minister Benjamin Netanyahu called the agreement “a historic moment after four peace agreements with four Muslim and Arab states in four months” and praised King Mohammed VI.
“Together we are advancing direct flights between the countries,” he said. “It will happen soon – economic, trade, technological cooperation and the opening of missions in both countries.”
Netanyahu also congratulated US President Joe Biden and Vice President Kamala Harris on entering office and said he expects to work with them “to strengthen the strong alliance between Israel and the US even more and expand the circle of peace between Israel and the Arab world for a real new Middle East and, of course, to deal with our shared challenges, foremost of which is the Iranian threat.”
Defense Minister Benny Gantz congratulated King Mohammed VI “for his bold leadership.”
“I am pleased that the process is moving forward,” he said. “We need to keep working with the Biden administration to expand and establish normalization and to respond to the Iranian threat.”
Jerusalem and Rabat renewed relations last year within the framework of the Abraham Accords, the normalization agreements between negotiated by the Trump administration. The US recognized Moroccan sovereignty over the Western Sahara. Israel expects to reopen its liaison office in capital Rabat in the coming days.
The agreement must still go to the Knesset for a vote and then back to the government for final ratification.
Israel and Morocco had secret ties since the 1960s, which became official in 1994, though they were not full diplomatic ties. Those relations were severed in 2000 in response to the Second Intifada.
The cabinet voted on an agreement that is “mindful that the establishment of full diplomatic, peaceful and friendly relations is in the common interest of both countries and will advance the cause of peace in the region, improve regional security and unlock new opportunities for the whole region.”
It grants “authorization for direct flights” and calls to “resume full official contacts between Israeli and Moroccan counterparts and establish full diplomatic, peaceful and friendly relations.”
In the declaration, the two countries agree to “pursue cooperation on trade; finance and investment; innovation and technology; civil aviation; visas and consular services; tourism; water, agriculture and food security; development, energy and telecommunications; and other sectors as may be agreed [to].”
The two countries also pledged to reopen liaison offices in Rabat and Tel Aviv.
In addition, the document recognized Morocco’s “historic role… in bringing the people of the region closer together and promoting peace and stability in the Middle East, and given the special ties that His Majesty maintains with the Moroccan Jewish community living in Morocco and throughout the world, including Israel.”
The Moroccan king emphasized that his position on the Palestinians has not changed.
Also Sunday, the UAE cabinet approved the decision to open an embassy to Israel in Tel Aviv, and Israel officially opened its embassy in the United Arab Emirates. Eitan Na’eh will serve as charge d’affaires until a permanent ambassador is appointed.
Foreign Minister Gabi Ashkenazi said that “opening the mission will allow the expansion of bilateral ties between Israel and the UAE for maximum and speedy realization of the potential in those relations.
In the coming days, Israel is also expected to open a consulate in Dubai, in addition to the Israeli embassy in Bahrain, which has been open for several weeks.
Tovah Lazaroff and Reuters contributed to this report.