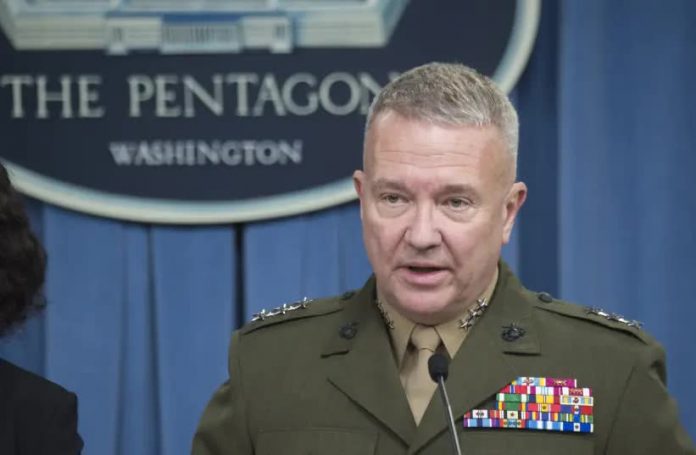 McKenzie’s upcoming visit comes at a time of increased tension in the region due to Iran’s continued aggression.

https://www.jpost.com-By JERUSALEM POST STAFF
CENTCOM Gen. Kenneth McKenzie
(photo credit: Wikimedia Commons)
Commander of CENTCOM, Gen. Kenneth McKenzie, will arrive in Israel later this week in what will be the first high-level visit by a top American official since Joe Biden was sworn in as president last week.
McKenzie’s upcoming visit – first revealed by Walla News Defense Analyst Amir Bohbot – was confirmed by government officials and comes at a time of increased tension in the region due to Iran’s continued aggression throughout the Middle East.
Israel has initiated a dialogue with the Biden administration with a focus on Iran and on Saturday night National Security Adviser Meir Ben-Shabbat spoke with his American counterpart, Jake Sullivan.
McKenzie’s visit comes after a recent decision by former president Donald Trump – in his final days in office – to move Israel from the jurisdiction of the European Command (EUCOM) in the US military to the Central Command. CENTCOM, one of 11 US Defense Department’s unified combatant commands, is responsible for the command and control of all US military forces in the Middle East, including Egypt, as well as Central Asia and parts of South Asia.
The move to CENTCOM is expected to pave the way for more overt military cooperation between Israel and Arab states in the Middle East, particularly the United Arab Emirates and Bahrain, with which Israel signed normalization agreements a few months ago.