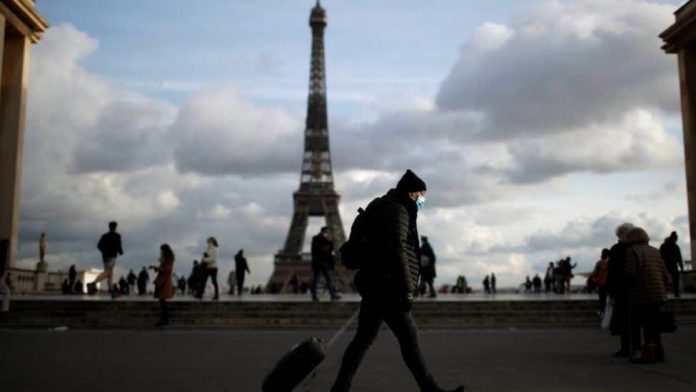 image caption More than 26,000 are now in hospital with the virus, according to government data

France’s top medical advisor said on Sunday that a third national lockdown would probably soon be needed to combat coronavirus in the country.

A strict curfew was implemented last weekend, but cases continue to climb.

Prof Jean-Francois Delfraissy, head of the scientific council that advises leaders on Covid-19, said “there is an emergency” and this week was critical.

He called for swift government action, amid rising concerns about the spread of new variants of the coronavirus.

Prof Delfraissy said data showed a new more transmissible variant first detected in the UK now makes up between 7-9% of cases in some French regions and will be hard to stop.

He said the country was in a better situation than others in Europe, but described the new variants as the “equivalent of a second pandemic”.

“If we do not tighten regulations, we will find ourselves in an extremely difficult situation from mid-March,” the advisor warned during an interview with BFM television.

The French government is expected to meet on Wednesday to decide if further measures are needed.

But daily infection numbers are rising – with the seven-day moving average now above 20,000 despite the 18:00 curfew.

The country’s virus death toll topped 73,000 on Sunday, as the country tightened restrictions on arrivals into the country.

Under new rules anyone entering from inside the EU by air or ferry must now present a negative Covid-19 test result within 72 hours of travel. Those entering France from the EU by road, including cross-border workers, will not be required to take a test.

President of the European Commission, Ursula von der Leyen, said last week that all non-essential travel “must be strongly advised against” but EU nations have so far agreed to keep borders open.