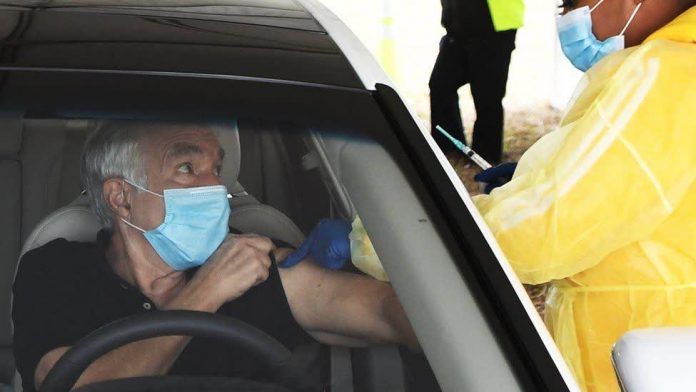 President Joe Biden has pledged to boost the rollout of Covid vaccines in the US, and has criticised the speed of the operation under the previous administration.

It’s been “a dismal failure thus far,” the president said, and he’s committed to overseeing 100 million vaccine doses administered in his first 100 days as president.

So how slowly has the rollout gone?

As of 20 January, the day Mr Biden became president, about 16.5 million vaccines had been administered in the US, according to official statistics.

When you look at the countries doing the most vaccinations by population, the US is fourth after Israel, UAE and the UK.

However, the US fell far short of the target set by the Trump administration, to vaccinate 20 million people by the end of 2020.

By 31 December, fewer than three million had received one.

Moncef Slaoui, who had been leading the government’s vaccine rollout plan, said at the time: “We know that it should be better, and we’re working hard to make it better.”

Mr Slaoui has since submitted his resignation at the request of President Biden.

Vaccinations have sped up considerably since the start of the year, more than doubling in the past week compared to the first week of January.

But the US is still some way off the one million doses a day average needed to hit the target set by the incoming Biden administration.

West Virginia has administered the second most vaccines per capita, with the state’s governor calling it a “diamond in the rough”.

It was the only state to opt out of a federal government programme through which large pharmacy chains vaccinated staff and residents in care homes (the first priority group) – and instead relied on local pharmacies, often with established links to care homes.

Mr Trump focused attention on what he saw as slow delivery by individual states, rather than at the federal level.

He tweeted on 29 December: “The Federal Government has distributed the vaccines to the states. Now it is up to the states to administer. Get moving!”

There have been issues around co-ordination and preparedness at the state level, but local authorities have put this down to a lack of support from the federal government once the vaccines are distributed.

Why the slow start?

The US health system is complex, with a variety of services run by different providers within each state. These sometimes report to state or local officials but they can also operate independently.

This makes co-ordination challenging when trying to get supplies to local vaccination centres.

Dr Anthony Fauci, the country’s top infectious disease expert, has said: “Whenever you take an undertaking of a magnitude of trying to vaccinate essentially most of the country, there’s always going to be a bump in the road or a hiccup that we see.”

The two vaccines approved for use in the US – from Moderna and Pfrizer/BioNTech – have to be stored at ultra-cold temperatures, which has caused further distribution difficulties.

There have also been other issues, such as in New York where officials have appealed for more supplies. Governors and mayors in other states have also complained of vaccine shortages.

Experts say significant logistical problems have arisen as well in administering the vaccines once they have been delivered to states.

As of 20 January, more than 35 million vaccines had been distributed across the US, but less than half of these had been put into people’s arms.

Public health professor at George Washington University, Dr Leana Wen said: “The federal government seemed to have ceded it’s responsibility at the point the vaccines were given to the states.

“The state and local health departments have been asking for months for additional funding, and have not been given the funding that they need,” she added.

Some feel a more targeted approach is needed, with the government providing funding to local authorities, depending on their needs.

A long-delayed pandemic aid package was eventually agreed by Congress at the end of December. It provided $8.75 billion to states to assist with vaccination efforts.

Local authorities have said this delay affected the setting up vaccine centres, and the hiring of staff to operate them.

What will Biden do differently?

The Biden administration has set out a Covid action plan, which includes measures to facilitate the distribution of vaccines.

The president wants to increase state funding, calling for a $25 billion package for vaccination manufacturing and distribution. This will have to be approved by US lawmakers.

He’s planning to open 100 federally funded vaccination sites, as well as mobile units to reach people in remote areas, staffing them with thousands of workers.

And in a significant departure from the previous administration, Biden’s team has proposed releasing all available vaccine doses as soon as they become available.

This is a controversial approach, as it potentially delays the availability of the second booster jab, but it’s one that has been adopted by the UK government and others.

This highlights problems that have already arisen over vaccine production shortages, and there are proposals to address this, such as securing commitments for increased supply from the manufacturers, and possibly reducing the vaccine dosage.

President Biden has appointed a new Covid-19 response team to plan and orchestrate these measures,

Dr Fauci, who is the president’s chief medical adviser, has said the target of 100 million doses in 100 days is “absolutely a doable thing”.