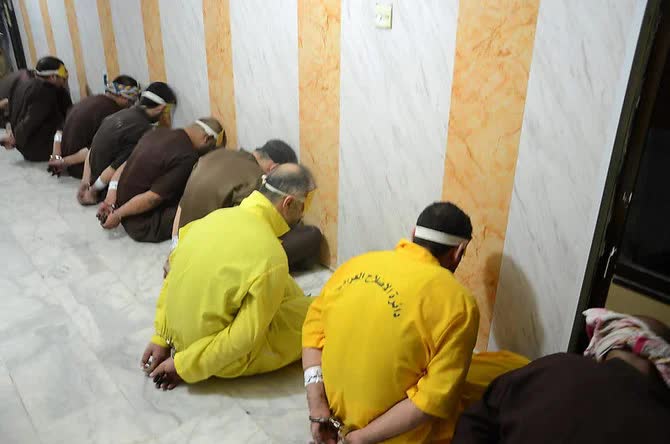 Rights defenders fear Iraq’s presidency may give the green light to a spree of executions of convicted militants to show strength in response to deadly suicide bombings in Baghdad. (File/AFP)

BAGHDAD: Rights defenders fear Iraq may give the green light to a spree of executions of convicted militants in a show of strength, days after a deadly suicide attack in Baghdad.
On Sunday, an official from Iraq’s presidency told AFP more than 340 execution orders “for terrorism or criminal acts” were ready to be carried out.
“We are continuing to sign off on more,” said the official, speaking on condition of anonymity.
The orders were disclosed to AFP after twin suicide attacks claimed by the Daesh group on Thursday killed at least 32 people in a crowded open-air Baghdad market.
The blasts were a jolting reminder of the persistent threat posed by the jihadists, despite the government declaring victory over them in late 2017.
The official, along with judicial sources contacted by AFP, could not provide additional details on when the executions may take place or if they included foreigners convicted of belonging to IS.
A 2005 law carries the death penalty for anyone convicted of “terrorism,” which can include membership of an extremist group even if they are not convicted of any specific acts.
Rights groups have warned that executions were being used for political reasons.
“Leaders resort to announcements of mass executions simply to signal to the public that they’re taking… (these issues) seriously,” said Belkis Wille, senior crisis and conflict researcher at Human Rights Watch.
“The death penalty is used as a political tool more than anything else,” she told AFP on Sunday.
In mid-2018, outgoing Prime Minister Haider Al-Abadi announced 13 executions under the Counter-Terror Law, and for the first time authorities published pictures of the hangings.
That came after Daesh killed eight civilians.

Since the official declaration of victory over Daesh, Iraq’s courts have sentenced hundreds to death for crimes perpetrated during the jihadists’ 2014 seizure of around a third of the country and their brutal three-year hold over cities including Mosul.
But only a small proportion of the sentences have been carried out, as they must be approved by the president.
Barham Saleh, who has held the post since 2018, is known to be personally against capital punishment, and has resisted signing execution orders in the past.
Some Iraqis took to social media to demand tougher action from Saleh after Thursday’s attack, accusing him of “not carrying out the sentences” and risking a prison break.
Despite Saleh’s moderating influence, Iraq in 2019 carried out the fourth highest number of executions among nations worldwide, after China and Iran, according to Amnesty International.
Iraq carried out 100 executions that year — one out of every seven worldwide.
Judicial sources told AFP at least 30 executions took place in 2020.
They include 21 men convicted of “terrorism” and executed at the notorious Nasiriyah prison in November.
The move sparked condemnations from the United Nations, which described the news as “deeply troubling” and called on Iraq to halt any further planned executions.

Rights groups accuse Iraq’s justice system of corruption, carrying out rushed trials on circumstantial evidence and failing to allow the accused a proper defense.
They also condemn cramped conditions in detention centers, saying those arrested for petty crimes are often held with hardened jihadists, facilitating radicalization.
Iraq’s government has declined to provide figures on detention centers or prisoners, including how many are facing terrorism-related charges, although some studies estimate 20,000 are being held for purported Daesh links.
UN Human Rights Commissioner Michelle Bachelet said late last year that given such gaps in Iraq’s legal system, implementing capital punishment “may amount to an arbitrary deprivation of life by the State.”
Ali Bayati, a leading member of Iraq’s Human Rights Commission, told AFP the country had “limited options.”
“Capital punishment is part of the Iraqi legal system — and we do not have real rehabilitation centers,” he said.
“We lack clear guarantees and real transparency in the interrogation and ruling sessions, and in allowing human rights organizations to play their role.”