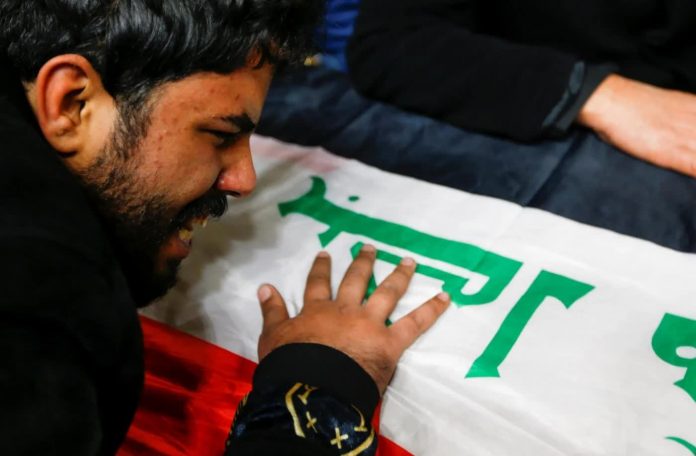 A man mourns at the coffin of a man killed in a twin suicide bombing attack in a central Baghdad market, at a funeral in Najaf (Reuters)

The shockwaves of Thursday’s deadly twin suicide bombings in Baghdad are still being felt in the country’s security and political spheres, with the subsequent removal of senior commanders by Prime Minister Mustafa al-Kadhimi angering several major political forces.

Kadhimi’s dismissal of a number of top commanders is being seen as an attempt by the prime minister to tighten his grip on more parts of Iraq’s security forces, Iraqi politicians and security officers told Middle East Eye.

At least 32 civilians were killed and 110 others wounded when two suicide bombers wearing explosive vests detonated themselves in a crowded market in Tayaran Square on Thursday morning. The Islamic State (IS) group claimed responsibility for the bombings on Friday.

More similar suicide attacks are expected to take place in Baghdad, Basra and several other provinces, according to security officials and a number of intelligence cables that have been leaked to the media during the past two days.

Since IS’s territorial defeat in the summer of 2017, suicide attacks in the capital that had once been gruesomely routine had become a rarity. The last had been in January 2018.

However, Thursday’s attack has raised many questions over IS’s capacity to carry out such operations in cities far from the northwestern areas its cells are thought to be hiding, in places such as Baghdad and Basra where it has no popular base to help facilitate its operations.

The most important question hovering overhead was whether IS had really carried out the attack, or whether another group had emerged using the same tactics. IS’s claim of responsibility came unusually slowly, and Iraqi and western intelligence privately queried whether the militant group was behind the bombing before its announcement, sources told MEE.

In an attempt to contain the repercussions of such a major security breach, and avoid a repetition, Kadhimi called a meeting of the Ministerial Council for National Security hours after the attack.

As well as the defence and interior ministers, the board includes the heads of all branches of the security and intelligence services, including the Hashd al-Shaabi paramilitary force.

They discussed the causes and repercussions of the security breach, the identity of the perpetrators and which provinces intelligence indicated could be future targets, security officials familiar with the meeting’s discussions told MEE.

Also discussed, the sources said, were ways to address the weaknesses that had been exposed.

Replacing a number of security and military field commanders, as well as the forces securing areas of Baghdad, was one of the decisions taken in the meeting. An investigative committee was also launched to probe negligence that led to the breakdown in security.

Kadhimi did not wait for the results of the investigation, however, and surprised his opponents late on Thursday by issuing a series of decisions that included the dismissal of five senior security and military leaders.

Lieutenant General Raed Shaker Jawdat, a commander whose career has been at standstill since being caught up in a corruption case in 2019, replaces Battat.

Saddam, Batat and Basri have the support of Iraq’s Shia political and armed factions – which see them as their men.

Kadhimi’s decisions to dismiss them has subsequently been considered an attempt to settle scores with his Shia rivals, who believe he is gnawing away at their footholds within the security establishment and bolstering his own control.

“It is clear that the excluded names have nothing to do with the bombings. Kadhimi’s decisions were merely settling scores,” a prominent Shia politician close to the prime minister told MEE.

The politician noted that the Falcons cell, an intelligence unit headed by Basri, is one of the country’s finest units and has played a key role in dismantling IS and uncovered dozens of its operatives. Firing someone with such a record is a harsh punishment, he said.

“Also, Amer Saddam is known to be a professional and talented in his work, and it is unfortunate for us to give up Amer, although he has achieved great successes,” the politician added.

“We have many reservations about these changes and the impression we got is that Kadhimi took advantage of the explosions to settle his accounts with some parties.”

Other than Abu Ragheef, all the replacements have the backing of the same Shia factions. But this has not placated the anger of their leaders, who consider the removal of Basri “one of the biggest blows that Kadhimi has dealt to them recently, according to the head of an Iran-backed parliamentary bloc.

“The exploitation of the al-Tayaran crime to settle scores with some security leaders is mean and villainous,” Abu Ali al-Askari, the spokesman of powerful Iran-backed paramilitary Kataeb Hezbollah, said in a statement on Friday.

“If there is someone who should be expelled, it is Kadhimi… and his group of accomplices in the intelligence services.”

Influential Shia cleric Muqtada al-Sadr’s Sairoon parliamentary bloc has also rejected Kadhimi’s alternatives, particularly the placing of Jawdat as commander of the federal police, as they see him as a former enemy over his role fighting Sadr’s Mahdi Army militia in 2008.

On the surface, Kadhimi’s orders are being carried out as he intended, and Abu Ragheef assumed his duties on Saturday, according to a brief statement issued by the interior minister’s office on Saturday.

But many political and security leaders have told MEE that negotiations are still ongoing with Kadhimi, and it is likely that some of his decisions will be cancelled.

‘Kadhimi has been trying to regain control of the intelligence agency in the interior ministry for a long time, but he was waiting for the appropriate opportunity’

Kadhimi’s rivals and some of his political allies are unanimous on only one thing: by replacing Saddam with Abu Ragheef, the prime minister now has control of a highly sensitive security service – “tightening his grip on internal and external intelligence,” as the head of a Shia party allied to the premier put it.

“Kadhimi took advantage of the recent explosions to pass a number of his decisions. The decision to dismiss Lieutenant General Amer Saddam and replace him with Abu Ragheef has been ready to sign for about a month,” a senior military commander familiar with the Ministerial National Security Council’s decisions told MEE.

“Kadhimi has been trying to regain control of the intelligence agency in the interior ministry for a long time, but he was waiting for the appropriate opportunity, fearing the reactions of his opponents,” the commander added.

“As for the Falcons cell, Basri has achieved great successes in his work and has no direct relationship to what happened in terms of the breach. But he has been in this position for nearly 10 years and must be changed.

“The rest of the changes are natural and due.”

Street anger, Salameh reportedly in US crosshairs: Everything you need to know to start your Friday 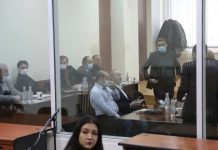