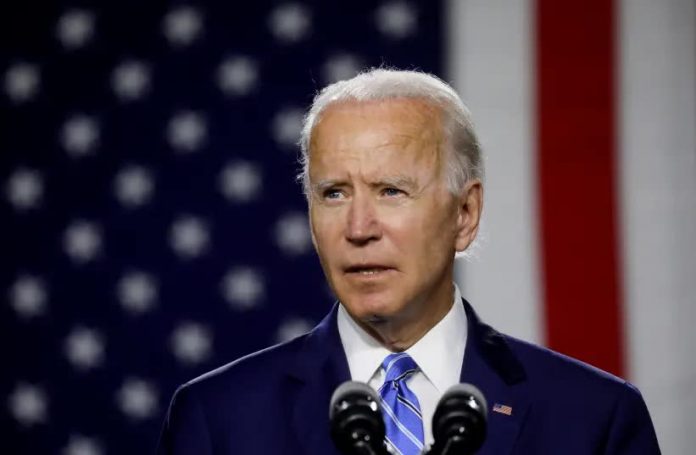 Gulf and Israel wary of new administration’s policy on Iran

US President-Elect Joe Biden in this file photo from July 14 2020
(photo credit: LEAH MILLIS/REUTERS)
Huge sighs of relief were heard in many halls and palaces throughout the Middle East when US President Joe Biden was inaugurated last Wednesday. Congratulations poured in from all corners of the region, from many presidents, kings, emirs, and prime ministers optimistic after four tumultuous years with the Trump White House.
The Gulf states also sent messages of congratulations as they await the new administration’s position on Iran.
Saudi Arabia, one of former President Donald Trump’s staunchest allies, said it was looking forward to cooperating with the new administration. Its foreign minister, Prince Faisal bin Farhan Al Saud, told Al-Arabiya news channel, which is financed by his government, that he was optimistic about having an “excellent relationship” with the US under the leadership of its new president.
There are several issues that may strain relations between Riyadh and Washington, among them the Iranian nuclear deal, the war in Yemen, and human rights in the kingdom.
Trump and his family have intimate relations with the Gulf monarchies. The former president made support for Saudi Arabia and the United Arab Emirates a cornerstone of his Middle East policy.
The front page of the Saudi pro-government newspaper Okaz wondered whether the Biden Administration would stand by its Arab allies or “renew [ties] with their enemies.”
In neighboring Bahrain, the Akhbar Al Khaleej newspaper said Trump deserved “thanks and appreciation.”
Israeli Prime Minister Binyamin Netanyahu, a close ally of the former president, taped a congratulatory message to Biden, saying he was looking forward to working together, urging him to continue expanding peace between Israel and regional states, and calling for unity on Iran.
No US president has done more for Israel than Trump.
Other good wishes appeared as tweets, including from Palestinian Authority President Mahmoud Abbas, who said he was “impatient” to work with Biden “for peace and stability in the region and in the world.”
The Palestinians cut ties with the Trump Administration after several controversial moves by the latter, including the recognition of Jerusalem as Israel’s capital in December 2017 and the subsequent relocation of the US Embassy to the city.
The US also shuttered the Palestine Liberation Organization mission offices in Washington in response to the PA’s refusal to enter into US-led talks with Israel.
The Palestinians consider East Jerusalem the capital of their future state and insist the US can no longer be an honest broker between them and Israel.
And in an attempt to force the Palestinians to the negotiating table, Trump cut off hundreds of millions of dollars of US aid.
When the White House finally unveiled its so-called “Peace to Prosperity” Middle East plan in January 2020, the Palestinians swiftly rejected it as overly biased in favor of Israel.
Now, the Palestinians are cautiously optimistic that the new US administration will bring with it winds of change.
In a tweet, King Abdullah of Jordan said, “Warmest congratulations to @POTUS @JoeBiden on his inauguration today. We highly value our strategic partnership and enduring friendship with the United States, and we look forward to working with you in pursuit of global peace and prosperity.”
Historically, Jordan has been a strategic ally of the US, with the countries cooperating in areas ranging from security and military issues to regional politics.
The US is the biggest provider of aid to Jordan. But under the Trump White House, relations between Amman and Washington have been cold.
When Trump rolled out his vision for peace in the Middle East last January, he did it with little to no consultation with Abdullah.  Making things worse, there was the US position on Israeli plans to annex the West Bank portion of the Jordan Valley, which Amman strongly rejects, calling it a threat to its national security.
Under the Trump Administration, Jordan’s role has been marginalized. Trump has bypassed the strategic relationship that the US had with the kingdom for decades, in favor of Gulf states.
Abdullah hopes this will change.
Meanwhile, there were no formal congratulations from US archenemy Iran but rather a conciliatory, toned-down message from President Hassan Rouhani hailed the departure of “tyrant” Trump while calling on the new administration to lift sanctions imposed over its nuclear drive.
“We expect [the Biden Administration] to return to law and to commitments, and try in the next four years, if they can, to remove the stains of the past four years,” said Rouhani.
Trump came down hard on Iran, imposing crippling sanctions as part of his “maximum pressure” policy.
Diplomatic talk with Iran has been absent, and Trump repeatedly said that if he were re-elected, a tougher agreement might be negotiated.
Biden has indicated that he is open to a return to the 2015 nuclear agreement and would negotiate a longer-term accord, with more rigorous constraints.
Turkey’s ambassador to the US congratulated Biden on behalf of Ankara.
“Congratulations to President Biden and Vice President Harris on the assumption of their duties,” Serdar Kılıç said on Twitter. “I hope this new administration will show the wisdom to strengthen relations with US’s long-term allies, while building new alliances, to better serve regional and int. peace and security.”
Trump had bragged that world leaders had come to him for help with President Recep Tayyip Erdoğan, saying Turkey’s leader would listen only to him.
Washington and Ankara have had their differences in the past over Syria, the US support of Kurdish forces in Syria that Turkey considers terrorist groups, and the most recent tensions over Turkey’s purchase of Russian S-400 mobile surface-to-air missile systems.
For more stories from The Media Line go to themedialine.org
Turkey’s fear of Biden stems from comments he made during the Second Gulf War, when he hinted he would be OK with breaking up Iraq into three countries, including one for Kurds.