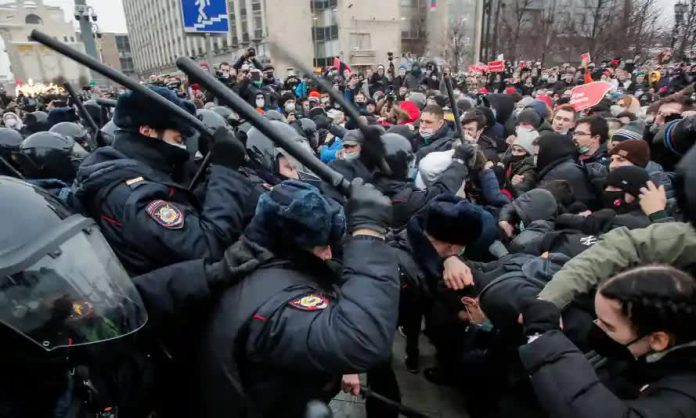 Police clash with protesters during a rally in support of jailed Russian opposition leader Alexei Navalny in Moscow on Saturday. Photograph: Maxim Shemetov/Reuters

The  Guardian- Andrew Roth in Moscow and agencies

European Union foreign ministers will consider potential “next steps” against Russia after western nations condemned the Kremlin’s harsh treatment of demonstrators calling for the release of opposition politician Alexei Navalny.

The United States, Britain and EU countries criticised Vladimir Putin’s government on Sunday, with the French foreign minister, Jean-Yves Le Drian, describing the mass arrest of thousands of protesters in several Russia cities as “an intolerable affront” and a “slide towards authoritarianism”.

Clashes broke out in Moscow, St Petersburg, Vladivostok and other cities on Saturday and some protesters clashed with riot police in body armour and helmets. Dozens of people were injured.

Poland’s president, Andrzej Duda, has called for the EU to step up sanctions against Russia over the treatment of Navalny, who was arrested on 17 January as he returned to Russia from Germany for the first time since being poisoned with a nerve agent.

“The only way to [avoid conflict] is to force international law to be observed. The only way to do this without rifles, cannons and bombs is via sanctions,” Duda told the Financial Times.

EU foreign ministers were expected to discuss their response to Navalny’s detention on Monday, with Borrell saying the “next steps” will be discussed.

Manfred Weber, a senior German conservative and head of the centre-right EPP grouping in the EU parliament, told Germany’s RND newspaper group that the arrest of protesters should not be tolerated and that Russia should face financial sanctions.

“It’s unacceptable that the Russian leadership is trying to make short work of the burgeoning protests by arresting thousands of demonstrators.

“The EU foreign ministers are not allowed to dodge this once again and stop at general appeals,” Weber said. “The EU has to hit where it really hurts the Putin system – and that’s the money,” Weber said, adding that the bloc should cut financial transactions from Putin’s inner circle.

In addition, a threat to stop the Nord Stream 2 pipeline, which is meant to double natural gas deliveries from Russia to Germany, must remain on the table, Weber added.

A German government spokeswoman declined to comment when asked whether Berlin was willing to support new sanctions against Russia following Navalny’s arrest.

EU lawmakers passed a resolution on Thursday calling for the bloc to stop the completion of the Nord Stream 2 gas pipeline as a response to Navalny’s arrest.

Germany’s chancellor, Angela Merkel, who has continued to back the project despite criticism elsewhere in the EU, said on Thursday her view of the project had not changed despite the Navalny case.

During the protests, a spokeswoman for the US embassy in Moscow, Rebecca Ros, said on Twitter that “the US supports the right of all people to peaceful protest, freedom of expression. Steps being taken by Russian authorities are suppressing those rights”. The embassy also tweeted a state department statement calling for Navalny’s release.

Putin’s spokesman, Dmitry Peskov, said comments by the US were “inappropriate,”, and accused Washington of “interference in our internal affairs”.