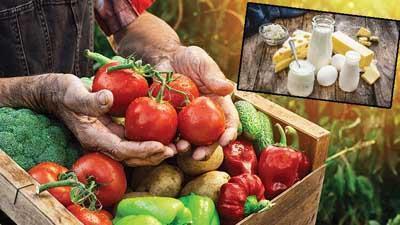 Stockpiling prompted by the pandemic, price hikes in raw materials, exchange rate volatility, increasing input costs, and speculative acts are among the reasons for food price inflation in Turkey, according to sectoral professionals.

“Especially in the last two months, we have been receiving complaints from industrialists in various sectors. They say that the U.S. dollar-denominated prices of raw materials – including those in agriculture, textile, forestry products, iron, and steel – have increased between 30 percent and 100 percent,” said Erdal Bahçıvan, head of the Istanbul Chamber of Industry.

“Currently, the markets are buoyant, and productivity is high, but there’s a big shortage in supply of raw materials,” he told daily Hürriyet.

He suggested that hardships in finding empty containers and high freight prices have also had a downward effect on imports and exports.

“Actually, there’s a pricing problem on a global scale. One of the foremost reasons behind these price hikes, which cannot be interpreted with supply and demand levels, is the cheap and abundant money spread to stimulate economies. The abundance of money paved the way for speculative acts. Attention on raw materials, commodities, metals, and agricultural products spiked up,” Bahçıvan said.

Tarık Tezel, head of the Turkish dairy and meat producers’ association, SETBİR, pointed to high taxes and informality in the food sectors.

“We think that a value-added-tax of 8 percent for staple food is too high. If this rate is lowered, the number of businesses operating informally would decrease, and prices of end products would decline,” he said.

He also said that fodder prices were heavily affected by exchange rate fluctuations.

“If plans of domestic fodder production are implemented, the big problem of fodder costs could be solved in the medium term,” he added.

Meanwhile, annual plant production in Turkey increased from 117 million tons in 2019 to 124 million tons last year, according to the Agriculture and Forestry Ministry.

The ministry expects food prices to ease in the spring.

The depreciation of the Turkish Lira against the dollar hiked import costs to some $9 billion in food, according to economists. The lira/dollar exchange rate has recovered over 10 percent since November 2020, hovering around 7.4.