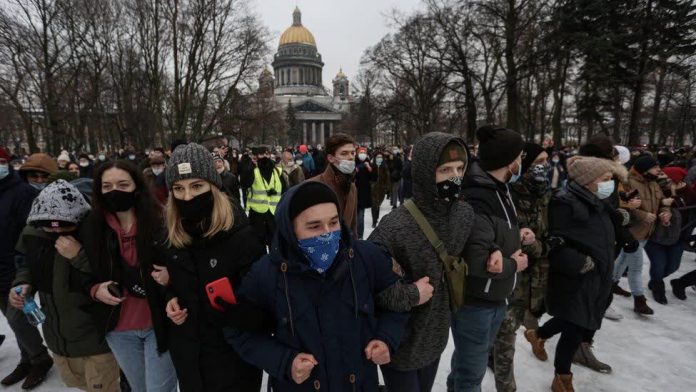 image caption Protesters, like these in St Petersburg, braved freezing conditions to turn out in support of Mr Navalny

Tens of thousands defied a heavy police presence to join the rallies on Saturday. More than 3,500 were detained, monitors say.

But President Vladimir Putin’s spokesman the next day claimed only “a few” people had turned out.

European Union foreign ministers meet on Monday to discuss their response, with calls for increased sanctions.

The foreign ministers of Estonia, Latvia and Lithuania are demanding “restrictive measures against Russian officials responsible for arrests”.

Poland’s President Andrzej Duda also urged the EU to step up sanctions on Russia following the arrest of Mr Navalny.

Mr Navalny, President Putin’s most high-profile critic, called for protests after he was arrested on his return to Russia a week ago.

Demonstrations were held on Saturday in about 100 cities and towns from Russia’s Far East and Siberia to Moscow and St Petersburg.

In Moscow, riot police were seen beating and dragging away demonstrators.

Observers say the scale of the demonstrations across the country was unprecedented, while the protest in the capital was the largest in almost a decade.

They appeared to enjoy widespread passive support, with trolley bus passengers waving to the crowds and large numbers of car drivers beeping their horns.

As pressure mounted on Sunday, Mr Putin’s spokesman Dmitry Peskov criticised a message from the US embassy in Moscow warning people to avoid the demonstrations, branding the warning an “interference in our domestic affairs”.

The embassy said such warnings were a “common and routine practice”, according to Reuters. The new Biden administration had previously called on the Russian authorities to release those detained, and condemned what it called “harsh tactics” used by the police against them.

Meanwhile, the Russian embassy in the UK also accused Western nations of using their embassies to encourage the protests.

Russia’s foreign ministry spokeswoman Maria Zakharova said criticism from Western nations was the result of “a very deep crisis of that very Western way of thinking, of Western pseudo-democracy and pseudo-liberalism”.

French Foreign Minister Jean-Yves Le Drian described the arrests of protesters as a “slide towards authoritarianism” and called for further sanctions against Russia.

Mr Navalny was detained after he flew back to Moscow from Berlin, where he had been recovering from a near-fatal nerve agent attack in Russia last August.

On his return, he was immediately taken into custody and found guilty of violating parole conditions. He says it is a trumped-up case designed to silence him.