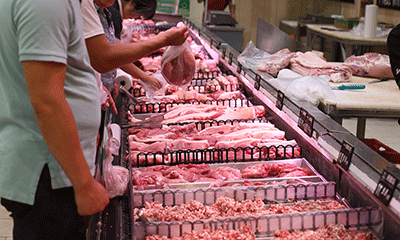 Time magazine on Friday posted an article entitled “How China could change the world by taking meat off the menu.” Although the article is about the prospect of promoting plant-based proteins in China, the author still draws a connection between Chinese eating meat and global environmental problems. For example, it said: “Livestock farming produces 20 percent to 50 percent of all man-made greenhouse gases… Halving China’s animal-agriculture sector could result in a 1 billion metric-ton reduction of CO2 emissions.”

In recent years, the West has constantly raised concerns over the impact of Chinese eating meat on the environment. In 2018, the Atlantic published a piece with the headline of “China’s love for meat is threatening its green movement.” In 2019, the Economist released an article entitled “The planet needs China to curb its appetite for meat.” It is reported in June 2020 that Pat Brown, chief executive of Impossible Foods, a company developing plant-based substitutes for meat products, even said, “Every time someone in China eats a piece of meat, a little puff of smoke goes up in the Amazon.”

Chinese people’s eating patterns remarkably differ from people in the West. Chinese mainly eat grain and vegetables, supplemented by meat, while for Westerners, meat has been their staple food. The proportion of meat in the diet of Westerners is much higher than that of Chinese.

Before the reform and opening-up in 1978, Chinese agricultural performance was poor, food shortages were common and meat was seen as a luxury for most Chinese families. After the economic reforms, with the improvement of living standards, meat consumption in China has risen. If meat intake leads to global warming, shouldn’t the West be principally responsible for the cause, as well as for long-term solutions?

The Time article states that China consumes 28 percent of the world’s meat. This data has been cited by Western media outlets since 2016. Western media tend to criticize China by referring to the total amount. As China is the most populous country in the world, using a total figure as a benchmark is unfair to China. Yet based on meat consumption per capita, the West far exceeds that of China.

The most popular meat in China is pork. But according to statistics released by the Organization for Economic Co-operation and Development (OECD) in 2020, pork consumption per capita of China fell behind Korea, Vietnam and Chile and the US.

In terms of beef, the OECD shows in 2020 that China’s consumption of 4.2 kilograms per capita lagged behind the world average at 6.4 kilos. The figure for Argentina was about nine times as much as that of China, and the US more than six times that of China. The consumption of many Western countries, including Australia, Canada, New Zealand and the UK, was also much higher than China’s.

According to media report, beef production causes five times more climate-warming emissions than pork. If having less meat is essential to “change the world,” it is more than fair to urge the West to reduce its beef consumption. The US consumed far more meat per capita in 2020 alone, so how can they pass the buck of Amazon destruction to China?

When interviewed by an Australian media outlet in 2010, former US president Barack Obama said, “If over a billion Chinese citizens have the same living patterns as Australians and Americans do right now, then all of us are in for a very miserable time. The planet just can’t sustain it.”

In the eyes of some Western elites, Westerners can have the privilege to eat meat while Chinese should just eat grass. They are reluctant to see Chinese are living an increasingly abundant life, and that the living standards of the Chinese are getting closer to the Westerners. They feel their sense of superiority including the one toward their political system challenged when they see Chinese, whose political path and values sharply differ from them, can also enjoy a better life. Their intent of groundless blame and “moral kidnapping” in the name of protecting environment or assuming international responsibility is simply to smear China’s international image and contain its further development.