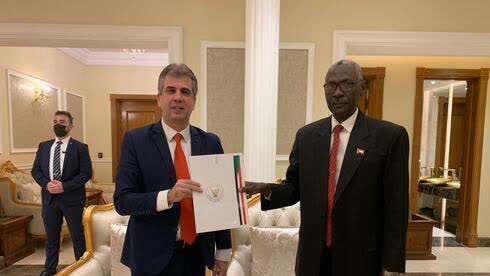 Bilateral talks include regional security and cooperation on economy, health and agriculture; parties signed the first memorandum of understanding on security between the two countries; Sudan officials made no comment after visit

Minister of Intelligence Eli Cohen on Monday led an official delegation to Sudan for the first time to discuss moving forward on a U.S.-brokered deal in October to normalize relations.

“I am confident this visit lays the foundations for many important collaborations that will assist both Israel and Sudan as well as security stability in the region,” Cohen said in a statement after returning home.

The minister led a delegation that included representatives from the National Security Council meat with Gen. Abdel-Fattah Burhan, head of the ruling sovereign council, and Defense Minister Yassin Ibrahim as well as other senior officials.

He and his hosts discussed issues including economic cooperation and signed a first memorandum of understanding with the Sudanese Defense Minister on regional security and stability.

Members of the delegation also raised potential economic cooperation between the two countries with an emphasis on water, agriculture, renewable energy, health and aviation.

The Israelis explored the possibility of bringing water desalinization technology to Sudan.

According to government officials, the Sudanese outlines their intention to scrap their laws imposing bans on Israeli products and said they would amend legislation mandating prison terms for returning citizens, thus clearing the way for Sudanese nationals seeking asylum in Israel to be repatriated.

There was no immediate comment from Sudanese officials but the minister said that a Sudanese government delegation is expected to visit Israel in the near future.

Sudan joined the United Arab Emirates, Bahrain and Morocco last year in agreeing to move toward normal relations with Israel. The new U.S. administration of President Joe Biden has said it wants to build on those deals.

Cohen, the first minister to head such a trip, said he met with Sudanese leaders and that the Israeli delegation discussed with their hosts a variety of diplomatic and security issues as well as the potential for economic cooperation.

It was agreed that a Sudanese delegation will travel to Israel, according to the Israeli statement.