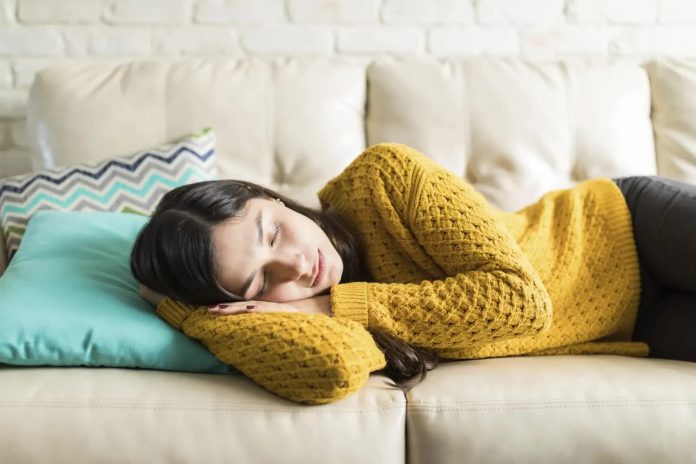 A new study found those who who enjoyed a post-lunch nap had higher cognitive performance than the non-nappers.Credit:iStock

Could a sneaky “nanna nap” be the secret to sharper memory, better language skills and a higher level of awareness? A new study, examining the link between an afternoon snooze and cognitive function in those aged over 60, suggests so.

The research, published on Tuesday in journal General Psychiatry, surveyed more than 2000 people in China to explore whether a power nap can help stave off cognitive decline and dementia.

Its findings were largely positive, suggesting that those who enjoyed a post-lunch kip had significantly higher cognitive performance than the non-nappers. The study also found “afternoon napping was strongly associated with orientation, language function and memory”.

So does that mean we should all be incorporating an afternoon siesta into our everyday routines?

Not necessarily, says Associate Professor Sutapa Mukherjee, a respiratory and sleep physician and the president-elect of the Australasian Sleep Association.

“You can’t necessarily extrapolate from this study directly to the Australian situation,” she says.

The study also focused on older people who were generally only sleeping for around 6½ hours at nighttime, and many appeared to have high blood pressure, says Mukherjee.

“Most adults need between seven and nine hours of sleep to feel rested,” she says. “So in my mind it makes sense that people who have an afternoon nap performed better on some of their cognitive tests, because this is a sleep-restricted population of people.”

Professor Sharon Naismith, a neuropsychologist from the University of Sydney’s Brain and Mind Centre, agrees that the study, which depended on a questionnaire to measure sleep, rather than say, sleep monitors, has some limitations.

“But having said that, it’s a very interesting topic, so it’s good to have a bit more research one way or another that looks at large groups of people who nap.”

The power of a nap

Naismith says other studies, carried out on people in their 20s, have demonstrated the benefits of an afternoon nap.

“They do show that a brief nap of about 10 minutes can give a bit of a boost to your alertness, to your memory, and to your mood,” Naismith says.

“If you have a longer nap of about 30 minutes or more, what happens is you start to go into your deep sleep, your slow-wave sleep. That’s actually really good for your brain because it starts to perform that kind of restorative process, and in fact the benefits on your cognition, on your mood, and on your sense of wellbeing are much more pronounced.”

The downside is that when you wake up from that longer sleep, you may be hit with sleep inertia – that groggy, dazed feeling.

Naismith says a number of studies have also shown that an afternoon nap can help boost your memory.

Regular napping is also linked to reduced risk of heart problems. A six-year study of more than 23,000 Greek men and women’s napping habits found that siestas of any duration or frequency were associated with a 34 per cent lower risk of dying from heart disease. And a Swiss study found subjects who napped once or twice a week had a lower risk of cardiovascular disease events.

It’s all about the timing

Nap for too long, or at the wrong time of day, and you could find yourself in a cycle of struggling to get enough sleep at night.

For most people, the best time for a snooze is straight after lunch, but before 2pm, says Naismith.

“The other thing is don’t nap for any more than 35 to 40 minutes, because if you do that it impacts on your night-time sleep.”

Don’t nap unless you really need to

While sleep always needs to be looked at on an individual basis, Associate Professor Sutapa Mukherjee says there are definitely benefits to an afternoon nap – but only really if it’s a voluntary choice to fall asleep, and part of a generally healthy lifestyle.

A shift worker, for instance, will likely find that a 20-minute afternoon nap will be restorative and improve alertness.

But for the general population: “If you are getting good sleep overnight and then napping during the day, then that’s a marker that something’s not right.”

She says in that situation, an underlying medical condition, or mental health issues, could be a factor.

So if you’re having regular unintentional naps – say nodding off at the dinner table, rather than while in bed reading a book – a visit to your GP might be in order.

Larissa Ham is a reporter and digital producer.