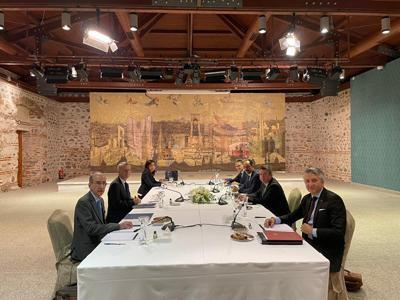 The European Union and United States praised the resumption of exploratory talks between Greece and Turkey on Monday, which ended a five-year hiatus after months of tensions over the eastern Mediterranean.

Turkish and Greek officials met in Istanbul to resolve the neighbouring countries’ long-standing differences over maritime borders in the Mediterranean and Aegean seas, as well as energy rights and air space. The talks made little progress in 60 rounds from 2002 to 2016.

The negotiations are “an important step” towards “advancing and consolidating our dialogue and cooperation”, EU foreign affairs chief Josep Borrell told reporters after a meeting with the bloc’s foreign ministers, according to Turkey’s state-run Anadolu news agency.

The U.S. government also praised the talks, saying it supported all efforts to reduce tension in the eastern Mediterranean.

“The United States welcomes … the commitment of both governments to this process,” State Department spokesperson Ned Price said on Twitter.

The agenda for the talks, which lasted more than three hours, was not disclosed. Another round of negotiations is expected to be held in Athens, a Greek diplomatic source told Reuters, without providing any further details.

Observers say the restarted talks are a test of Ankara’s efforts to improve its ties with the EU, which has supported Greece and threatened sanctions on Turkey for exploring for hydrocarbons in maritime waters claimed by Athens and the government of Cyprus.

German Foreign Minister Heiko Maas said he and his EU counterparts decided not to sanction Turkey in the meeting with Borrell.

“There are no Turkish ships in the contested areas in the eastern Mediterranean anymore; exploratory talks between Turkey and Greece have begun,” Maas said, according to Deutsche Welle. “Those are all positive signals that we had waited for a long time, which should now not be strained by sanctions.”

Hours after the negotiations resumed, French Defence Minister Florence Parly said her country will present proposals to Greece for the renewal of its fleet of frigates, Reuters reported. France has finalised a 2.5-billion-euro ($3.04 billion) deal for Greece’s purchase of 18 Dassault-made Rafale fighter jets, she said.

The first deliveries of the advanced French warplanes are expected in July. The Rafale purchase is one of several procurements by the Greek government, which also include buying four new frigates, helicopters and drones, upgrading its existing fleet of F-16 fighter jets and purchasing torpedoes and missiles to boost its armed forces.