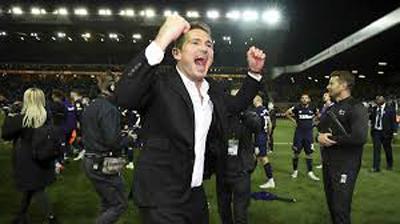 The lengedary Blues midfielder was appointed the team’s coach in 2019, just a year after his managerial debut with Derby County. His success with the club last season – Chelsea finished in the top four and got into the Champions League last season – was apparently not enough for Roman Abramovich to spare him following a sixth Premier League defeat.

Frank Lampard has released a statement a day after being fired as Chelsea manager. The 42-year-old said it was “a huge privilege and honour” to manage the Blues and thanked the club’s fans for their “incredible support”.

“I am proud of the achievements that we made, and I am proud of the academy players that have made their step into the first team and performed so well. They are the future of the club”, reads the statement on the League Managers Association’s website.

At the same time, Lampard wrote that he was disappointed at not being given more time “to take the club forward and bring it to the next level”.

Ever since the club was purchased by Russian oligarch Roman Abramovich the managerial situation has resembled a revolving door. Even such iconic figures as Jose Mourinho did not spend much time at the helm of the club. Abramovich parted ways with Carlo Ancelotti a year after the Italian led the club to the Premier League title. So it seems that by Chelsea’s standards Lampard should be happy he wasn’t sacked earlier.

Who Will Lead Chelsea Next?

British media outlets are speculating that Thomas Tuchel is the favourite to replace Lampard. The German had a good run with Paris Saint-German. Last year, he led the club to a second-place finish in the Champions League, and unlike other managers he is available following the end of his two-year contract with PSG. He will be an indisputable authority for young players in Chelsea, a man who coached football superstars Neymar and Mbappe. His roots will also make it easier to communicate with Chelsea’s German “diaspora” – Timo Werner, Kai Havertz, and Antonio Rüdiger.