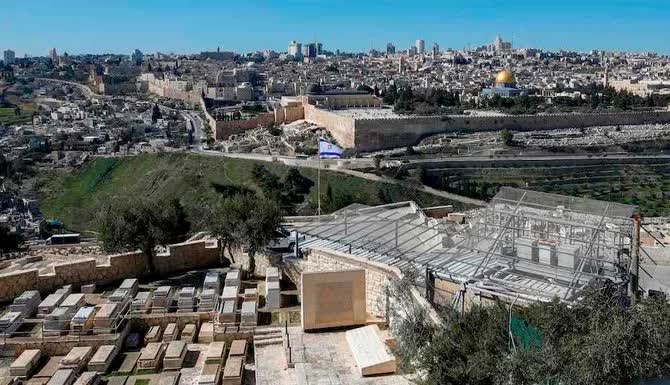 An Israeli flag flutters at the Mount of the Olives with a view of the Dome of the Rock in Jerusalem’s Al-Aqsa mosque compound in the background, on Jan. 22, 2021. (AFP)

AMMAN: Jordan urged Israel on Monday to stop blocking restoration work at Jerusalem’s Al-Aqsa mosque compound, Islam’s third holiest site.
Jordanian foreign ministry spokesman Daifallah Alfayez said he had sent a “protest note” demanding Israel “refrain from such violations and provocations, and respect the mandate of Jordan in administering Muslim holy sites.”
There was no immediate response from Israel.
Under a 1994 peace deal, the Jewish state recognizes Jordan’s oversight of Muslim holy sites in east Jerusalem, the Palestinian sector of the city occupied and annexed by Israel since 1967.
Known by Muslims as the Haram Al-Sharif, or Holy Sanctuary, and as the Temple Mount by Jews, the compound houses the golden Dome of the Rock shrine and Al-Aqsa mosque.
Jordan, which said Israel’s police had interrupted restoration work on the Dome of the Rock,” stressed that the Waqf, the Islamic endowments authority, was “the sole authority responsible for the supervision and maintenance of Al-Aqsa.”
On Sunday, the Waqf accused Israeli police of blocking “all reconstruction projects in the compound,” including stopping building supplies and “the entry of basic materials necessary for maintenance.”
The Waqf said maintenance teams were “unable to maintain or repair the most basic facilities of the mosque and its employees are exposed to prosecution, threats of arrest and expulsion.”
On Saturday, the Waqf said police stopped work by “photocopying the identity cards of workers and technicians, preventing them from working and threatening them with arrest if work continues.”