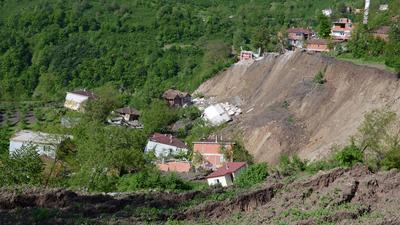 Landslides have ranked second following earthquakes as the type of natural disaster that claims the most deaths in Turkey, according to a study.

A study was initiated in 2017 by the Istanbul Technical University’s (İTÜ) Eurasia Institute of Earth Sciences in order to detect the deadly landslide events in the country.

Landslides that claimed deaths between 1929 and 2019 were analyzed from digital and print media sources in line with the study carried out by Tolga Görüm and Seçkin Fidan.

A database containing fatal landslide events was created as a result of intense research that lasted for about three years.

A total of 1,343 people died in 389 fatal landslides in the country in the last 90 years, according to the research.

On average, 15 people die a year due to landslides, while four fatal landslides occur in Turkey on average each year, the study noted, making landslides the second most deadly type of disaster after earthquakes.

Fatal landslides were experienced in 67 of the 81 provinces in the country, with Black Sea provinces of Trabzon and Rize taking the lead in the ranking of landslides that claimed the most deaths, according to the research.

The highest fatal landslide incident in Turkey occurred in 1929 at the border of Trabzon and Rize provinces.

Some 148 people died in the disaster, which affected 19 villages in total.

Around 74 people lost their lives in the rubble flow incident in the Senirkent district of the southwestern province of Isparta in 1995.

Speaking to the state-run Anadolu Agency, Görüm said that the fatal landslides in Turkey were mostly experienced in two regions; the Eastern Black Sea region and the vicinity of Istanbul.

“While mortal landslides triggered by natural factors are intense in the Eastern Black Sea region, fatal landslides are experienced in Istanbul and its surroundings, triggered by anthropogenic factors,” Görüm said, noting that the increase in deaths parallels with the population density.

In the study, the trigger factor of 45 fatal landslides that resulted in the death of 159 people could not be determined.

Explaining that landslides have doubled in the last 20 years, Görüm said that the average deaths have increased in proportion to the number of landslides.