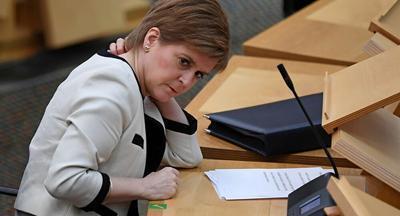 Late last week, Nicola Sturgeon accused UK Prime Minister Boris Johnson of being “frightened of democracy” as he continues to refuse to allow another independence vote for Scotland.

UK Secretary of State for Scotland Alister Jack has lashed out at Scottish First Minister Nicola Sturgeon over her latest remarks concerning a second independence referendum. Jack was elected Scottish Conservative MP for Dumfries and Galloway in June 2017.

“The affirmation of Nicola Sturgeon that the values of Scotland are different from the rest of the UK is not only false”, he told reporters on Monday, adding that “it is deeply offensive to the majority of Scots who voted to remain part of UK in our referendum on Scottish independence in 2014”.

Referring to Sturgeon’s message to rejoin the EU, Jack asserted it had “little to do with Scotland’s relationship with” the bloc and that her words “serve a different purpose: to divide the British people as part of their campaign to break up our country”.

“The referendum to leave the European Union was close, but it was a fair and democratic decision”, the secretary of state for Scotland underscored.

He argued that Sturgeon “does not speak for Scotland”, berating her for only making comments to “further her cause, which is to break up the United Kingdom and ignore our three hundred years of shared history”.

“Here is my message on the occasion of Burns Night: in Scotland we are Scottish, British, and European. We can be, and we are, all of these things. And we are proud to have you among our friends!”, Jack pointed out. Burns Night, which is celebrated annually in Scotland on 25 January, commemorates the birth of great Scottish poet Robert Burns.

Jack’s remarks come a few days after Sturgeon told “The Andrew Marr Show” that her government will hold an independence referendum if the Scottish National Party (SNP) wins a majority in the May elections.

She also claimed that UK Prime Minister Boris Johnson “fears the verdict and the will of the Scottish people” as he continues to refuse to allow another independence vote.

“He’s frightened of democracy. The polls now show a majority of people in Scotland want independence. If the SNP wins the Scottish election in a few months’ time on a proposition of giving people that choice then what democrat could rightly stand in the way of that?”, the first minister added.

This followed the SNP unveiling a “roadmap to a referendum”, which laid out the party’s 11-point plan on how they intend to pursue a second vote.

The roadmap states that any attempt by the UK government to oppose the legality of holding a vote will be “vigorously opposed” in the courts.

Johnson’s spokesperson was later cited by British media outlets as saying that “Scotland had a referendum on this issue and the people of Scotland voted to stay a part of the United Kingdom and the prime minister’s focus is on defeating coronavirus as the government’s top priority, supporting jobs and levelling up across the country”.

During the 2016 referendum on membership in the European Union, Scotland largely voted against Brexit. Scottish voters were first asked whether they wanted independence for Scotland in September 2014, with 55% voting against it.

The government in Holyrood has since proposed a second referendum, which hasn’t been approved yet as Prime Minister Johnson has repeatedly opposed the idea.