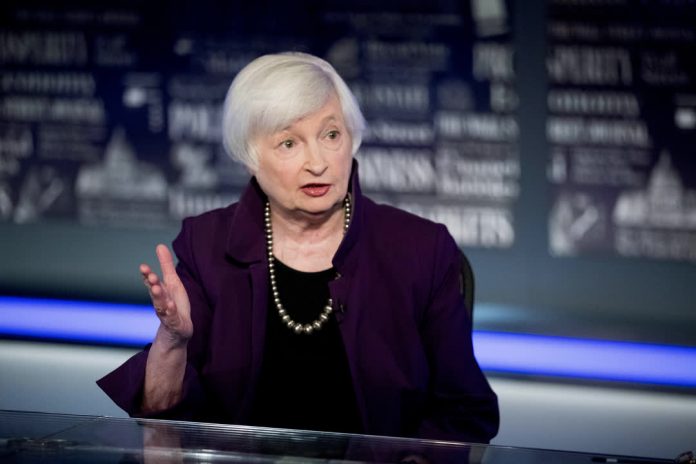 The Senate confirmed Janet Yellen, the former chairwoman of the Federal Reserve, as Treasury secretary on Monday evening, putting into place a battle-tested economist who has pledged to implement the Biden administration’s plan to prop up the nation’s pandemic-scarred economy.

The Senate voted 84 to 15, with one senator abstaining.

As Treasury secretary, Yellen will face a colossal challenge as the U.S. attempts to rebound from the deadly coronavirus pandemic, which has killed more than 410,000 Americans, infected more than 24 million and triggered the worst economic downturn since the Great Depression. Employers cut more than 22 million jobs during the first two months of the pandemic; there are still about 9.8 million more Americans out of work than there were in February before the crisis began.

During her confirmation hearing, Yellen called on lawmakers to provide more stimulus to the nation’s sputtering economy in order to avoid a deeper and longer recession and issued a full-throated endorsement of the $1.9 trillion relief package that President Biden outlined last week. The measure includes $350 billion in aid for state and local governments, a third $1,400 stimulus check, boosted unemployment benefits through September and new funding for vaccine distribution.

“More must be done,” Yellen told the Senate Finance Committee during her confirmation hearing on Tuesday. “Without further action, we risk a longer, more painful recession now — and long-term scarring of the economy later.”

Yellen — who acknowledged the U.S. eventually needs to reduce its debt and move closer to long-term fiscal sustainability —  argued that with record low-interest rates, the federal government needs to address the pandemic-induced downturn before it can curtail spending.

“Right now, with interest rates at historic lows, the smartest thing we can do is act big,” she said. “In the long run, I believe the benefits will far outweigh the costs, especially if we care about helping people who have been struggling for a very long time.”

Yellen will be the first woman to lead the Treasury Department since it was established in 1789. But the 74-year-old is no stranger to shattering glass ceilings: She was the first woman to serve as Federal Reserve chair, a role that she held from 2014 to 2018 after she was appointed by former President Barack Obama. She was confirmed to be Fed chair by a Senate vote of 56 to 26 (and 18 abstaining).

This history-making Treasury nomination of Yellen was supported in a letter from eight previous Treasury secretaries, who served both Republican and Democratic presidents.

Under her tenure, unemployment fell to 4.1% – a decline of 2.6 percentage points from when she started – and inflation remained below 2%. A resounding majority of economists surveyed by the Wall Street Journal in 2017 gave her positive reviews, with 60% saying she deserved an “A” on her performance. Thirty percent gave her a “B.”

After an early slip-up — during her first Fed press conference, she sent stock markets plunging when she said the U.S. might start raising interest rates six months after ending its bond purchasing program — she became known for always being prepared and carrying a thick binder of notes to news conferences.

Yellen also ushered in a new era of thinking about policy-making at the Fed. In 2011, when Yellen was serving as vice-chair of the U.S. central bank, inflation was well over the Fed’s 2% target range — an occurrence that typically would have prompted policymakers to raise interest rates.

But with unemployment still high, Yellen encouraged the Fed to not overreact to what turned out to be a temporary blip.

In 2018, she was succeeded by then-Fed Governor Jerome Powell and would work closely with him in her new role, advising on the U.S. economic recovery from the pandemic. She is the first Fed chair not to be reappointed after serving a first full term.

Born in Brooklyn, Yellen earned a Ph.D. in economics from Yale in 1971 before rising through the ranks of academia. She served as president of the San Francisco Federal Reserve Bank from 2004 through 2010; in 2010, she was appointed as vice-chair of the Fed’s board of governors in Washington.