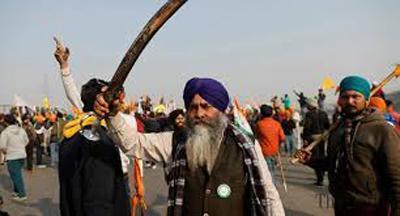 The Delhi Police had earlier given permission to protesting farmers to carry out their proposed tractor rally against new farm reforms by the Narendra Modi government.

Indian farmer rallies during Republic Day have turned violent, with protesters and police filmed clashing, and officers reportedly using tear gas. Police used their batons to disperse the rallies, while some protesters were spotted wielding swords.

Clashes in the capital and in other cities across the country erupted as Indians were celebrating the holiday, marking the 72nd anniversary of the day the Constitution of India came into effect.