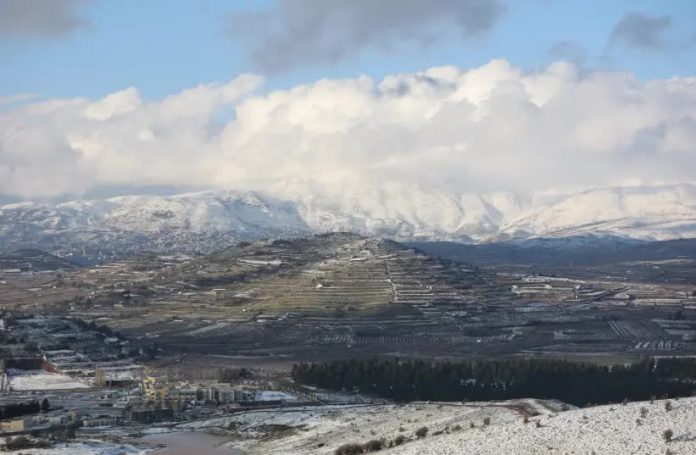 Recently, reports have surfaced of both Israeli and Syrian airstrikes in areas close to the border.

View of Mount Hermon covered with snow as it seen from the northern Golan Heights, near the border with Syria, January 20, 2021.
(photo credit: MAOR KINSBURSKY/FLASH90)
Land military forces — Syrian Armed Forces — of the Syrian Arab Army were spotted on the Lebanese side of Mount Hermon in the north of Israel on Monday night, Syrian state-media reported.
The Syrian Army is under the directive of Syrian president Bashar Assad and is comprised largely of Sunni Muslims.
Recently, reports have surfaced of both Israeli and Syrian airstrikes in areas close to the border. On Friday, four Syrian family members were killed in an alleged Israeli airstrike, with Syrian air defense systems reportedly activated.
The US has reportedly supported Israel in these alleged airstrikes.
The alleged attack is the latest one in a row of similar attacks attributed to Israel. The previous one was reported on January 13, when airstrikes, allegedly carried out by Israel, targeted dozens of sites in the Deir al-Zor region of eastern Syria and in Albukamal near the Syria-Iraq border – leading to between 25-50 casualties.
And two weeks earlier, an attack attributed to Israel targeted areas in north-western Syria near the city of Masyaf, mainly damaging a munitions factory in Masyaf, which primarily produced missile engines, rockets and warheads.
The Armed Forces, the land body of the Syrian Army, is its strongest division. It is the body behind the decade-old Syrian Civil War, as well as Syria’s four wars with Israel.
The cluster of mountains that is Mount Hermon, or Jabal al-Shaykh, is the apex of the Golan Heights, and splits between Israel and Lebanon at its summit. The very top of the mountain is controlled by UN forces.
A section of Mount Hermon was captured by Israel during the Six Day War in 1967, which today is used as a critical observation point for Israeli security forces.
The IDF is preparing for a massive war drill, slated for this upcoming summer. The drill is expected to last a month, and will simulate a full-scale war, including with Gaza, and extending to the northern threat, which will be the main focus.
The IDF said that the main goal is to have their forces prepared, but there is also an important message to be conveyed to Hezbollah in the north, the Syrians in the east and to Iran.
Syria maintained an extended occupation of Lebanon from 1976 to 2005. Since the start of the Syrian Civil War in 2011, both supporters and opponents of the Syrian Arab Army brought the fight to Lebanon. Lebanon’s Shi’a Muslims support the Syrian government, led by Assad, while Lebanon’s Sunni Muslims support the rebel forces.
Military activity has slowed since then, though it hasn’t halted completely.
View the original SANA report, and photos of the Syrian Army in the snow of Mount Hermon here.
Reuters, Tzvi Joffre, and Tobias Siegal, and Tal Lev Ram contributed to this report.