A positive agenda adopted by the EU Council in December is in the mutual interest of both Turkey and the European Union, the German envoy in Ankara has said, stressing that Brussels was open and ready for talks with Turkey to develop relations further and resolve existing conflicts.

Jürgen Schulz, Germany’s Ambassador to Ankara, explained Berlin’s views on Turkey-EU ties and evaluated the current climate on the bilateral relationship in an exclusive interview with the Hürriyet Daily News.

Schulz welcomed the resumption of the Turkish-Greek exploratory talks after nearly a year-long tension in the eastern Mediterranean in which Germany played an important role in de-escalating the tension as the EU term president.

First of all, thank you very much for this interview, Mr. Ambassador. My first question is in the scope of the relations between Turkey and the European Union. Shortly after you arrived in Ankara last summer, your country got the helm of the EU term presidency and had to deal with the tension in the eastern Mediterranean. From the point of view of the German diplomacy, how would you evaluate the six months that were marked by the difficult mediation of the situation between Greece and Turkey, which roots in highly complex historic problems?

In the second half of last year, Germany held the presidency of the European Union. During this time, we worked very hard to strengthen relations between the EU and Turkey. Turkey is an important partner for us, and we have every interest in having good relations based on mutual trust. At the same time, during this period, tensions were high in the eastern Mediterranean, and we, as an EU member state, share the con-cerns of our EU partners, Greece and Cyprus. Against this background, Chancellor [Angela] Merkel and Foreign Minister [Heiko] Maas held many talks with their Turkish counterparts over the past months with the aim of de-escalating tensions and finding solutions via dialog.

What are Germany’s expectations from the Turkish-Greek exploratory talks? How do you evaluate the resumption of direct talks?

We very much welcome the resumption of exploratory talks between Turkey and Greece in Istanbul. During his visit to Ankara on Jan. 18, Foreign Minister Heiko Maas once again stressed the fact that the resumption of dialogue between Turkey and Greece is both an important first step and good news for the entire region. We have always placed great emphasis on our view that the settlement of disputes needs to be based on negotiations and international law.

Before it will be possible to enter into genuinely constructive talks, the trust that has been lost will need to be re-built. That’s why it is so important to recommence without delay a serious and result-oriented dialogue based on mutual respect and international law. The issues on the agenda are complicated, but they can be solved. I am confident that this process can lead to a fair and equitable solution acceptable to both sides. It remains essential that Turkey contributes to this process by following the path of sustainable de-escalation in a consistent and credible manner.

How would you evaluate the EU Council’s conclusions in December? Which steps do you think Turkey and the EU should take until the end of March for a resilient and stable relation?

The EU set out where it sees its interests being challenged by Turkey and spelled out possible consequences. At the same time, the EU is open and ready for talks with Turkey to further develop relations and to resolve existing conflicts.

The EU expects Turkey to refrain from provocations in the eastern Mediterranean and to solve the disputed issues through dialogue. We follow the latest developments in Varosha with great concern. At the same time, the EU has offered to exchange views with Turkey on how to make progress on issues that Turkey would like to advance with the EU. We very much welcome the new tone that is being set as it enables us to discuss our different views and perceptions.

To turn the positive agenda into a real and solid element in ties, Turkey has specific expectations from the EU, particularly on visa liberalization, modernization of the customs union and renewal of the EU-Turkey migration deal. Does Germany advocate for further steps to be initiated in these topics? Some assessments say that especially in the question of the customs union, Germany’s decision will be important.

Germany’s aim is to have a positive agenda between the EU and Turkey, and we are convinced that this is in our mutual interest. With some of the issues you mentioned – like visa liberalization – the ball is currently in Turkey’s court. Advancing other subjects such as the modernization of the Customs Union will in the first instance depend on the overall development of the EU-Turkey relations in the coming weeks and months. And incidentally the same holds true for updating the EU-Turkey declaration of March 18, 2016. Germany could, in principle, envisage an “update” to this declaration. However, for this, there will need to be a conducive framework. Only then details could be negotiated amongst the EU member states, and, following that, between the EU and Turkey. 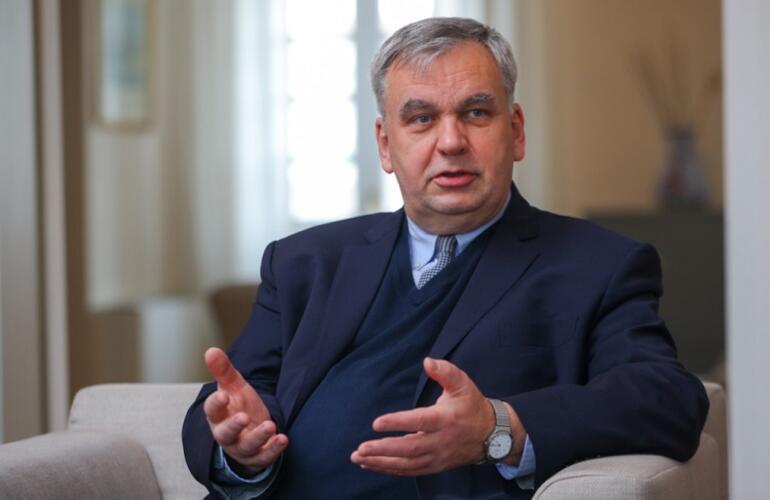 How about the bilateral relations between Turkey and Germany? After a long period of tension, it seems the relationship is much calmer and stable. Do both sides understand each other better now, or has “agree to disagree” come to the fore?

German-Turkish relations are extraordinarily close and cover everything from politics to business and culture and last but not least — of course, on a personal or private level – ties between families and friends. This means we are tied in a very special way.

Naturally, this can mean that we occasionally have different views and perceptions on some matters. And as a consequence, it is also normal that in certain cases we need to talk through what the best goal or the best means to achieve that goal might be. Most important, however, is that we keep talking and together work on solutions.

‘Our aim is to further deepen economic cooperation’

Germany and Turkey are important trade partners. What plans are currently being made to increase trade and mutual investments?

German-Turkish business relations are multifaceted and clearly extensive. The trade volume between our two countries amounted to some $38 billion in 2019. Germany is the most important market for Turkish exports, and we are Turkey’s second-largest import partner. Five million German tourists visited Turkey in 2019. Currently, there are more than 7,500 companies in Turkey with German equity participation. They operate across a wide range of sectors and cover all facets of business from industrial production to services and wholesale and retail trade.

These are remarkable numbers. But we do not want to be complacent about them. On the contrary, our goal is to further extend and deepen our economic cooperation. The German Embassy in Ankara together with our consulates across Turkey is in close contact with the Turkish government. Company representatives are in close dialogue to expand the potential of our economic cooperation. Examples are the Joint Economic and Trade Commission (JETCO) and the Energy Forum. Together with the German Chamber of Commerce (AHK), the embassy regularly participates in conferences and briefings. This provides German companies with a comprehensive overview of cooperation and investment opportunities in all sectors and regions of Turkey.

The majority of German investments in Turkey are so-called “Greenfield-Investments.” This means genuinely new investments, and over the past years, they have created more than 100,000 jobs. In addition, most of what Germany exports to Turkey are capital goods used in production processes – in particular machines and not as might be thought consumer goods. This holds especially true for the automobile sector and the textile industry where the capital goods contribute significantly to strengthening export-oriented production in Turkey.

Foreign Minister Maas said in a statement at the end of July that except for material and equipment for naval forces no arms exports to Turkey will be approved. This decision was seen by some in Turkey as a “hidden arms-embargo.” Does this policy of Germany continue and how is it being justified?

The German government pursues a restrictive and responsible arms-export policy. Of course, we take into account the fact that Turkey is our NATO ally. Before any decision is taken on granting an export license, a request is thoroughly examined and takes into account relevant foreign and security policy considerations.

One news which depicts the uniqueness of the German-Turkish relations was that German-Turkish scientists, Uğur Şahin and Özlem Türeci, developed an mRNA-vaccine against COVID-19. How do you evaluate this fact, which filled both countries with pride?

The speed with which BioNTech and its founders successfully developed a new and highly effective vaccine against the COVID-19 virus is an extraordinary achievement. It also illustrates how individuals with roots in or ties to Turkey have become truly important players in both Germany’s economy and society.

This story is testimony to the fact that successful integration has great benefits for all of us. And this not only applies to the founders of BioNTech but also innumerable other cases. But Uğur Şahin’s and Özlem Türeci‘s success is truly unique. It is a true gift for Germany, Turkey and the whole world. They are living proof of what first-class researchers from the most diverse personal and familial backgrounds are able to achieve in Germany. At BioNTech, people of more than 60 different nationalities are working together. This really shows that if we cooperate internationally, we can succeed in taking on all sorts of global challenges.

What kind of cooperation can Germany and Turkey develop additionally in the course of the pandemic? Turkey, like many other countries in the world, is currently in talks with Pfizer-BioNTech about joint vaccine production. Which points are taken into consideration with the German government as opportunities for cooperation?

In many respects, the global threat of the pandemic has served as a catalyst – strengthening international cooperation in the fields of politics, business and research. Today, no country stands alone in the fight against the virus. Turkey and Germany are a case in point as they have been closely working together during the pandemic – coordinating travel and flight restrictions and providing medical supplies. Germany is also working with Turkey in the context of the COVAX initiative, which aims at a fair and equitable distribution of vaccines globally.

As you see, there is a great deal of cooperation taking place between our two countries during the pandemic. But of course, today, we are already starting to look ahead to future post-pandemic challenges. I am convinced that Germany and Turkey will be among the countries whose economies will be able to recover relatively quickly from the shock of the pandemic, and this will once again provide us with many more opportunities for cooperation.