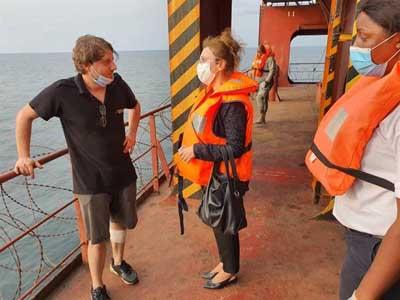 Turkey has established contacts with the neighboring countries of Nigeria to rescue its 15 sailors who were kidnapped by a group of pirates last week, Turkish Foreign Minister Mevlüt Çavuşoğlu has said, informing that assailants have not reached yet to demand ransom from Turkey or the shipping company.

“We are in contact with the regional countries and their relevant institutions. We are following the developments very closely,” Çavuşoğlu told the reporters on Jan. 25 at the Turkish Parliament.

Pirates have attacked a Turkish cargo ship off the West African coast in the Gulf of Guinea, killing an Azerbaijani sailor and kidnapping 15 others with Turkish citizenship. Sailing under the Liberian flag, the M/V Mozart ship was traveling from the Nigerian city of Lagos to Cape Town, South Africa, when the attack took place late Jan. 22.

The ship sailed to Gabon and was anchored at Port Gentil off Libreville.

The Turkish Ambassador to Libreville is in close contact with the Gabonese officials who have taken necessary security precautions for the ship and its sailors, Çavuşoğlu said, informing that the process for the transportation of the body of the Azerbaijani sailor from Gabon to Azerbaijan via Turkey has begun.

Turkish media identified the victim as engineer Farman Ismayilov of Azerbaijan, the only non-Turkish crew member.

Çavuşoğlu also informed about the countries that Turkey has contacted and sought cooperation to rescue the sailors.

“Pirates have not gotten in touch with us, the company, or the families of the sailors,” he said.

Similar attacks have happened in the same region in the past, and this latest attack should be a lesson to regional countries and company owners to take additional security measures, Çavuşoğlu stated.

President Recep Tayyip Erdoğan and all other senior Turkish officials are closely following the developments and doing whatever necessary to safely rescue the Turkish kidnapped sailors, Çavuşoğlu said.

According to reports, the pirates disabled most of the ship’s systems, leaving only the navigation system for the remaining crew to find their way to the port.

The Maritime Traffic website showed the vessel’s location was last recorded at 16:39 GMT on Jan. 23.