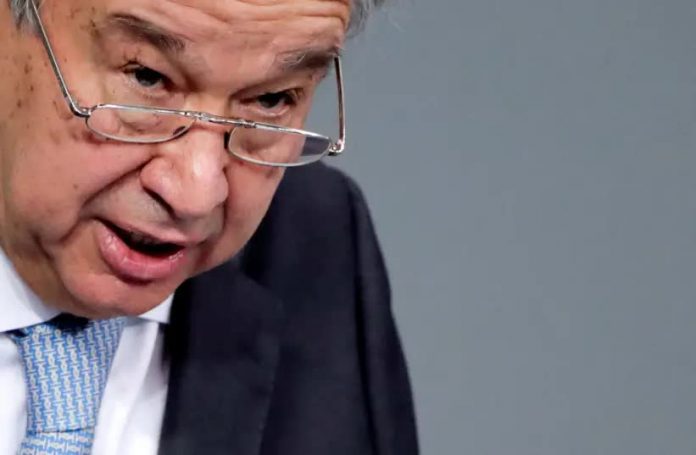 “Antisemitism continues to blight our world. It is sad, but not surprising, that the COVID-19 pandemic has triggered yet another eruption of this poisonous ideology.”

United Nations Secretary-General Antonio Guterres delivers a speech at the lower house of parliament Bundestag in Berlin, Germany, December 18, 2020.
(photo credit: REUTERS/HANNIBAL HANSCHKE/FILE PHOTO)
COVID-19 has triggered a new wave of antisemitism at a time when Neo-Nazism and white supremacy was already on the rise, UN secretary-general Antonio Guterres said on Monday night.
“Antisemitism continues to blight our world. It is sad, but not surprising, that the COVID-19 pandemic has triggered yet another eruption of this poisonous ideology,” Guterres said as he spoke at a special ceremony at the Park East Synagogue in New York City, ahead of Wednesday’s International Holocaust Remembrance Day.
He painted a bleak picture in which antisemitism, xenophobia, hate speech, white supremacy, Neo-Nazism and Holocaust denial has grown stronger.
“In Europe, the United States and elsewhere, white supremacists are organizing and recruiting across borders, flaunting the symbols and tropes of the Nazis and their murderous ambitions,” Guterres said.
Such symbols were also part of the Capitol riots, he said.
Guterres added that the Anti-Defamation League (ADL) in 2019 recorded the highest level of antisemitic incidents since it began tracking the matter in 1979, Guterres explained.
The more time people spend online, the more vulnerable they are to propaganda, fear and hatred disseminated by the white supremacists and Neo-Nazis.
“They even trade information on how to infect minority communities, by effectively making themselves into bioweapons,” Guterres said.
In some counties Neo-Nazis ideas have entered mainstream debate in other nations Neo-Nazis have “infiltrated police and state security services,” he said.
The rise of these dangerous ideologies, he said, have come about as the result of “a global attack on truth that has reduced the role of science and fact based analysis in public life.”
Guterres added that, “When truth dies, it is far easier to exploit real and imagined differences between groups to scapegoat communities and groups of people.”
Recovery from COVID-19 must also address issues that were exposed by the pandemic, such as antisemitism, he explained.
“There is no vaccine for antisemitism and xenophobia. But our best weapon remains the truth,” he stated.
Global action is needed, he urged, to build “an alliance against the growth and spread of neo-Nazism and white supremacy, and to fight propaganda and disinformation.”