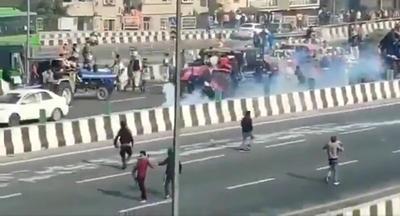 The Delhi Police had earlier given permission to protesting farmers to carry out their proposed tractor rally, saying they would only be allowed to hold it after an annual military parade concluded in the national capital. High security is now in place in the city for the nation’s Republic Day festivities.

Police have used tear gas shells and resorted to baton charging to prevent agitating farmers from entering India’s national capital when an annual military parade was being carried out in the city.

It happened on Tuesday as farmers, who have been protesting against new agricultural laws since November, barged into Delhi from different borders by breaking barricades.

The incident occurred as a high alert was in place across the country to prevent any untoward incidents during the country’s 72nd Republic Day.

Agitated farmers are due to hold a tractor rally against the new farm reforms of the Narendra Modi government.

Various visuals from across the city show policemen using batons and firing tear gas shells at the farmers at different points.

Police use tear gas on farmers who have arrived at Delhi’s Sanjay Gandhi Transport Nagar from Singhu border. #Delhi #Farm

Farmers are protesting against the Farmers (Empowerment and Protection) Agreement of Price Assurance and Farm Services Act, 2020, Farmers Produce Trade and Commerce (Promotion and Facilitation) Act, 2020, and the Essential Commodities (Amendment) Act 2020.