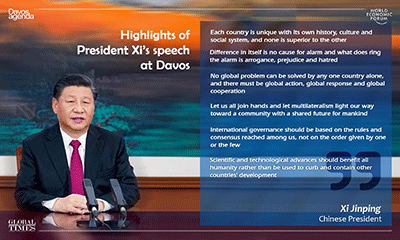 Addressing the World Economic Forum on Monday night, Chinese President Xi Jinping delivered a stern repudiation of bullying tactics, ideological prejudice and hatred as well as economic decoupling and sanctions, which he warned could push the world into division and confrontation, and offered an inclusive multilateral approach that would guide the world out of darkness. Through the speech, China is also sounding the alarm and offering constructive suggestions for future China-US relations, Chinese observers noted.

In the notably sharp-toned speech, the Chinese president did not name any specific country, but the extensive references of unilateral and populist trend were clearly aimed at policies orchestrated by the US government over the past several years, which have not only plunged the US into disarray but also disrupted global cooperation to tackle the COVID-19 pandemic and other challenges, Chinese analysts noted.

While criticizing those toxic policies, Xi also mounted a staunch defense of inclusive multilateralism based on mutual respect and equality, and transcends ideological and political differences, vowing that China will play a more active role in promoting open, inclusive and balanced economic globalization. The stress on mutual respect and equality could also be viewed as a basis for rebuilding China-US relations under a new US administration, analysts pointed out.

The sharp criticism of the US polices under former US President Donald Trump also sounded alarm for China-US relationships, which has been plunged into a historic low, and laid the basis for constructive engagement under the new US administration, analysts said.

Stressing that upholding multilateralism is the right way out of problems faced by the world, Xi urged countries to work together and address international issues through dialogue and warned against sowing division and isolation.

“To build small circles or start a new Cold War, to reject, threaten or intimidate others, to willfully impose decoupling, supply disruptions or sanctions, and to create isolation or estrangement will only push the world into division and even confrontation,” Xi said. “We cannot tackle common challenges in a divided world, and confrontation will lead us to a dead end.”

The remarks highlighted the current crisis faced by the world, which is facing an unprecedented public health crisis that has sickened 99.2 million people worldwide, killed 2.13 million and plunged the global economy into deep recession, all while the international community has failed to come up with a coordinated approach, as some countries, most notably the US, resorted to scapegoating, dereliction of responsibility and denial of science.

Further reflecting the failure of such an approach is an out-of-control epidemic in the US, where 25.2 million people have been infected and over 419,000 have been killed, while political and social division have resulted in chaotic unrest and response, analysts pointed out.

Joe Biden, who replaced Donald Trump on Wednesday, was not listed as a speaker at the five-day Davos Agenda meeting, where over a dozen world leaders including French President Emmanuel Macron, German Chancellor Angela Merkel and Indian Prime Minister Narendra Modi are scheduled to speak.

“[Biden] has too many domestic problems… and I’m afraid that he has not figured out how to position himself in foreign policy and what he can say,” Li Yong, deputy chairman of the Expert Committee of the China Association of International Trade, told the Global Times on Monday.

In the roughly 30-minute speech, Xi did not name the US once but made several pointed remarks about policies spearheaded by the US government over the past four years.

“The misguided approach of antagonism and confrontation, be it in the form of a Cold War, hot war, trade war or tech war, would eventually hurt all countries’ interests,” Xi said.

In another reference to certain US forces’ attempt to stir ideological confrontation between China and the West, Xi said that “difference in itself is no cause for alarm. What is alarming are arrogance, prejudice and hatred.”

Analysts said that while the Chinese president was speaking in more broad terms of much-needed global cooperation, the sharp criticism and call for mutual respect could also be interpreted as a principle in China-US relations.

In the wide-ranging speech, Xi said that to address the “intricate and complex” problems faced by the world, the world should stay committed to openness and inclusiveness, international law and rules, and consultation and cooperation.

“Multilateralism is about having international affairs addressed through consultation and the future of the world decided by everyone working together,” Xi said, adding that “to beggar thy neighbor, to go it alone, and to slip into arrogant isolation will always fail.”

The speech was also aimed at highlighting China’s vision of “true multilateralism” in the wake of talks about multilateral cooperation among Western democracies, according to Gao Fei, vice president of China Foreign Affairs University in Beijing.

Defending multilateralism, Xi also vowed that China would take a more active role in pushing for “economic globalization that is more open, inclusive, balanced and beneficial to all.”

In the speech, the Chinese President also pledged that China will continue to take an active part in global cooperation on COVID-19, including sharing information, helping countries and regions less prepared for the pandemic and working for greater accessibility and affordability of COVID vaccines. China will also contribute to the global economic recovery by further implementing a win-win strategy of opening-up.

“We hope these efforts will bring more cooperation opportunities to other countries and give further impetus to global economic recovery and growth,” Xi said.

After effectively containing the virus months ago and mounting a remarkable economic recovery, many world leaders and businesses communities around the world would be encouraged by China’s role in the fight against the pandemic as well as the economic recovery, Li said.

“What the world hopes to hear was China’s experience in fighting the virus as well as its plan to contribute to the global recovery, as the world’s second-largest economy,” he said.