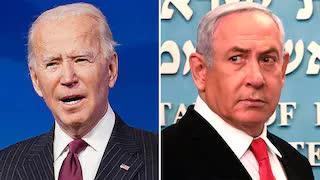 President Biden has taken steps to reverse Trump-era policies in the Middle East by throwing the administration’s support behind finding a two-state solution between Israel and Palestine.

In a virtual speech to the United Nations Security Council Tuesday, acting U.S. ambassador to the United Nations Richard Mills said the one-week old administration supports a “viable Palestinian state,” but will “maintain its steadfast support for Israel” – signaling the delicate balance they will try to juggle.

The Trump administration closed the Palestine Liberation Organization office in Washington, D.C., froze all federal contributions to the U.N. Relief and Works Agency – which provides support for Palestinian refugees, and moved the U.S. embassy from Tel Aviv to Jerusalem, a sticking point for Palestinians who also view Jerusalem as a holy city that should be in Palestine.

But the former Secretary of State Mike Pompeo also helped draw up a peace proposal that allowed Israel to maintain their control in the West Bank, which the United Nations has deemed an illegal occupation since 1967.

Mills recognized the challenge that lies ahead for the Biden administration as they attempt bridge a divide that has yet to be accomplished since Israel’s inception in 1948.

But the acting U.S. ambassador also said that the Biden administration believes “the best way to ensure Israel’s future as a democratic and Jewish state,” is by securing their relationship with Palestine.

He also applauded the diplomatic ties that the Trump administration forged between Israel and several Middle Eastern nations, including the United Arab Emirates, Bahrain, Sudan and Morocco.

Though while these accomplishments will likely be attributed as one of Trump’s greatest successes as president, Palestine sees these normalized relationships as a betrayal from Arab nations.

“We hope it will be possible to start working to slowly build confidence on both sides to create an environment in which we might once again be able to help advance a solution,” Mills said Tuesday.

Mills told the 15-body panel that the U.S. does not seek to reverse Trump-era polices merely to appease the Palestinian government, but for security in the region.

The acting ambassador also told the UN panel that they will attempt to continue to normalize ties between the Jewish state and surrounding Arab nations, but noted it is “not substitute for Israeli-Palestinian peace.”

Despite the Biden administration’s clear intent to reverse most Trump-era policies in how the U.S. works with Israel, Mills did not say they U.S. would remove the U.S. embassy from Jerusalem.