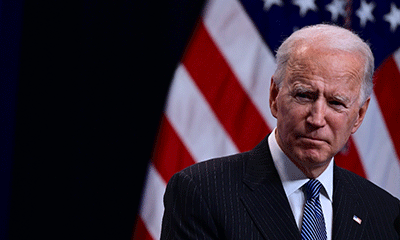 US President Joe Biden answers questions from the media after signing a “Made in America” Executive Order in the South Court Auditorium at the White House on January 25, 2021 in Washington.Photo: AFP

China on Tuesday called on the new administration of US President Joe Biden to reverse what officials called the “wrong policies” toward China under former president Donald Trump, and instead take a positive and constructive approach to pull bilateral ties back to the right path, in a direct response to what analysts said was rather negative signals from the new US administration of repeating similar grievances and ill intentions that were a hallmark of the previous government.

In the first public remarks from the Biden administration regarding policies toward China, the White House vowed to take an “approach of patience” to review the relationship, echoing Trump’s thoroughly debunked accusations against China’s trade practices and criticisms of China’s internal and foreign policies.

Such remarks could signal that the Biden administration will likely continue the misguided attempt to contain China’s rise to preserve US dominance, though specific tactics may differ from those of Trump’s, Chinese analysts said, adding that China has made clear that it would reject any bullying tactics and ideologically and politically motivated sanctions and that any relationship must be based on mutual respect and equality.

That was on full display in a speech by Chinese President Xi Jinping on Monday night at the virtual Davos World Economic Forum (WEF), in which he did not name the US but harshly refuted the US’ bullying tactics, economic decoupling and sanctions and offered a constructive approach to international relations that is based on mutual respect and equality and transcends ideological differences. China’s chief diplomat, Yang Jiechi, is also expected to echo those principles in a highly anticipated speech on China-US relations at the National Committee on US-China Relations (NCUSCR) on February 1.

“We hope the new US administration can learn from the Trump administration’s wrong policies toward China, treat China and China-US relations objectively and rationally, adopt a positive and constructive policy toward China… pushing China-US ties back on the right track of sound and stable development,” Zhao Lijian, a spokesperson for the Chinese Foreign Ministry, said at a routine press conference in Beijing on Tuesday when asked about the latest remarks from the US.

During a press briefing on Monday that was dominated by questions regarding China, White House Press Secretary Jen Psaki said, “We’re starting from an approach of patience as it relates to our relationship with China,” adding that the US was going to conduct an internal review and consult with its allies and US political parties.

While that largely echoes Biden’s previous remarks before taking office about his policy toward China, Psaki notably went further by largely repeating the Trump administrations’ claims against China, including painting China as a strategic competitor, accusing China of intellectual property theft, industrial espionage and force technology transfer. She even criticized China as being “more authoritarian at home and more assertive abroad.”

“Clearly, being patient does not mean Biden will become a Buddha. It just means that [Biden] will deploy tactics that are more measured, more established, more systematic and institutionalized… the nature of the US policy [to beat down China] will not change,” He Weiwen, a former economic and commercial counselor at the Chinese Consulate General in San Francisco and New York, told the Global Times on Tuesday.

He added that the Biden administration’s call for “strategic patience” did not signal its intent to repair the seriously damaged bilateral ties, but instead give itself more time to come up with a better strategy to take on China, after Trump’s approach not only failed to contain China’s rise but also sent the US in a downward spiral.

“The main reason he needs to conduct a review is that over the past four years, Trump tried to suppress China, but four years later, China continued its rise yet the US declined,” He said, warning that if Biden continues to try to contain China, bilateral ties would not improve.

Lü Xiang, an expert of US studies with the Chinese Academy of Social Sciences in Beijing, told the Global Times on Tuesday that the “patience” mentioned by the Biden administration has a complex meaning. The US is in a total mess whether in terms of economic performance or the pandemic, so China policy is not a priority. It is not ready to issue a mature and comprehensive China policy.

Chinese analysts said the “patience” also shows that US elites are changing their strategy, as Trump was “boiling the frog with piping hot water” and now the Biden administration wants to use “warm water.” This means the Biden administration still considers China is a strategic competitor, but it will not use the radical and thoughtless approaches used by its predecessor.

Lü said that patience also means cautiousness. Since China-US ties have already reached the lowest point, any change to ease the tension or restart dialogue would be a positive sign at least. The possibility of more conflicts cannot be excluded, as some senior members in Biden’s team have displayed a hostile stance toward China, Lü said.

Although Trump’s frenzy of erratic actions over the past four years has almost entirely frozen bilateral relations, its intention to contain China’s rise has evidently failed.

Zhang Weiwei, a professor and director of the China Institute of Fudan University in Shanghai, told the Global Times on Tuesday that Biden is facing three major internal and external challenges – a divided and polarized domestic society, a disobedient international alliance system and a “competitor” [China] that will never surrender.

The latest evidence is that China was the only major economy to record positive growth in 2020, at 2.3 percent, after keeping the COVID-19 epidemic under control, while the US economy is estimated to have contracted by 3.6 percent with an out-of-control epidemic. China is widely expected to overtake the US to become the world’s largest economy sooner than previous predictions. Also in 2020, China surpassed the US as the biggest recipient of foreign direct investment with a 4 percent growth, a UN report showed.

Such a continuous rise in China’s national and economic strength despite one difficulty after another gives China sufficient advantages to respond to potential moves from Biden with its own strategic patience, analysts said. China will likely try to improve the relationship, but it will also firmly stick to its long-stated principles and bottom lines regardless, the analysts noted.

“Biden is likely to make some compromises, but China also needs to be patient and cautious. No matter how the US changes its tactics or strategy, China needs to insist on its decisions that have gained wide consensus domestically, such as strengthening self-reliance in the fields of science and technology, and speeding up the process of national reunification [solving the Taiwan question]. We need to unshakably insist on these,” Zhang stressed.

Since the US is highly polarized, we cannot exclude the possibility that the Biden’s era is just a transitional period, said Zhang, noting that Trumpism could return in 2024, so China’s policy toward the US today not only depends on what Biden will change, but also must consider all possibilities.

China needs to be strategically calm and patient, and the US is at the most unconfident period since the end of the World War II, and its strength is weakening, Zhang said. “So if it still chooses to confront China, we will have the confidence to handle it, and time is on our side.”

Yang Jiechi, member of the Political Bureau of the Communist Party of China Central Committee and director of the Office of the Central Commission for Foreign Affairs, is scheduled to speak on China-US ties via video on February 1 US time at the invitation of the NCUSCR, according to the committee’s website.

In his first speech to an American audience since the Biden administration took office, Yang will speak on the state of the bilateral ties and prospects for the future.

Lü said this shows China’s sincerity to fix the ties and restart cooperation, but Yang is also likely to warn the opportunists and adventurists among US politicians, as they can potentially close the window for both sides to improve relations.

At the WEF speech on Monday night, Xi made clear China’s stance on international relations and multilateral cooperation. Xi said that “to build small circles or start a new Cold War, to reject, threaten or intimidate others, to willfully impose decoupling, supply disruption or sanctions” would only push the world into confrontation. He urged countries to abandon “ideological prejudice and jointly follow a path of peaceful coexistence.”

While the speech focused on multilateralism, the points also apply to China-US ties, as some in the US are pushing for ideological and political confrontation and seeking a “multilateral approach” to unite allies against China, analysts said.

Despite the ominous signals from the Biden administration, former officials and businesses on both sides are calling on the two governments to return to dialogue to improve ties, starting in trade talks.

Speaking at the Hong Kong Forum on US-China Relations on Tuesday, Zeng Peiyan, former vice-premier of the State Council, said that “China and the US should launch a new round of trade talks on the basis of evaluating the phase one trade agreement in an objective and comprehensive manner.”