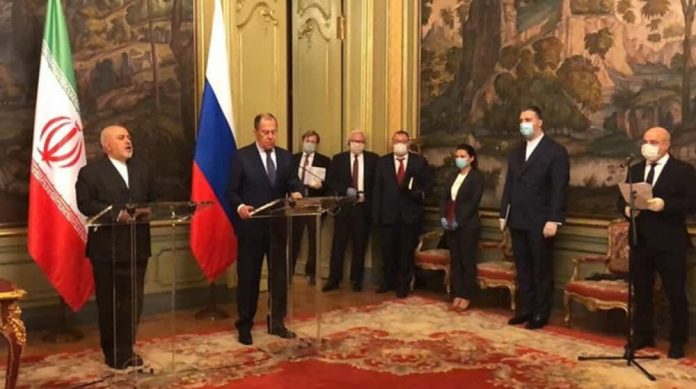 Foreign Minister Mohammad Javad Zarif says Iran will take proper action whenever the United States lifts the sanctions to pave the way for its return to the 2015 nuclear deal, stressing that the Islamic Republic takes Washington’s actions, not words, as its yardstick.

“What we have heard from the new United States administration [so far] has mostly been in the form of words and announcement of its positions,” Zarif said on Tuesday at a joint press conference with his Russian counterpart Sergei Lavrov during a visit to Moscow.

“However, it is actions that we [choose to] respond to,” he added.

The newly-inaugurated US President Joe Biden has voiced a willingness to return his country to the 2015 nuclear deal between Iran and five other world states — namely France, Britain, Germany, Russia and China.

His predecessor, Donald Trump, ended Washington’s participation in the deal and returned the heavy-handed sanctions that the agreement had lifted.

Trump took the measures unilaterally and in spite of the fact that the accord, officially known as the Joint Comprehensive Plan of Action (JCPOA), has been ratified by the United Nations Security Council in the form of a resolution.

After returning the bans, Trump’s administration also began applying secondary sanctions against the countries that would abide by the UN resolution and retain their trade with the Islamic Republic.

Iran began a set of nuclear countermeasures after the US’s departure from the JCPOA and a decision by America’s European allies to toe Washington’s sanction line.

Zarif said in Moscow that whenever the US lifted the sanctions again and stopped punishing the world’s law-abiding countries that choose to engage in legal trade with Iran, as the UN resolution allows, Tehran would be ready to deliver a befitting response, too.

Earlier this month, Leader of the Islamic Revolution Ayatollah Seyyed Ali Khamenei delivered a televised address, asserting that Iran’s “ultimate and definitive” position on the matter was that the US had to primarily lift its sanctions against the Islamic Republic. Ayatollah Khamenei called the Iranians’ right to lead a sanction-free existence “a right that has been usurped” by Washington.

Zarif said, “In line with the Leader’s statement, return to the JCPOA would be possible if the sanctions were removed,” adding, “The Leader declared that if the US lifted sanctions in an effective manner, we too would reverse all of our [counter]actions.”

A French presidency official claimed Tuesday that the Islamic Republic must first reverse its reciprocal measures vis-à-vis the JCPOA before the United States could rejoin the deal.

“If they are serious about negotiations and want to obtain a new commitment from all participants in the JCPOA, first they must refrain from further provocations and second they must respect what they are no longer respecting,” the official said on condition of anonymity.

Zarif hit back on Twitter, reminding that it was the US that abandoned the deal, and must therefore “remedy its wrong.”

“Why on earth should Iran—a country that stood firm & defeated 4 years of a brutal US economic terrorism imposed in violation of JCPOA & UNSC Resolution—show goodwill gesture first? It was the US that broke the deal—for no reason. It must remedy its wrong; then Iran will respond,” the top diplomat wrote.

Lavrov also said Tuesday that Moscow and Tehran “share the same position” on how to preserve the historic deal. He reiterated that it was up to the United States to take the first steps by removing the sanctions if the Biden administration was sincere in its assertion that it wants to go back to the nuclear deal.

“This in turn will provide the preconditions for the implementation of all requirements of the nuclear deal by the Islamic Republic of Iran,” he told reporters.

The most recent bout of Iran’s countermeasures came after the Iranian Parliament passed a law, ordering the administration to resume uranium enrichment at 20-percent purity level.

As per the law, Iran will also stop abiding by the Additional Protocol of the Nuclear Non-Proliferation Treaty (NPT), which enables more intrusive inspections of the country’s nuclear facilities, as of February 21.

According to Zarif, a potential sanctions relief would, however, not only be followed by Iran’s continued implementation of the Additional Protocol, but also entail reversal of all of the country’s retaliatory nuclear steps.

Lavrov, meanwhile, called “salvation” of the JPCOA “one of the most acute topics on the agenda” of his talks with Zarif, Russia’s Sputnik news agency reported.

“Both we and Iran are deeply interested in the full return of signatory states to fulfilling their obligations under the accord,” the Russian diplomat added in reference to the need for the US and its Western allies to resume their contractual commitments.

Zarif, in turn, expressed gratitude for Moscow’s “constructive and unwavering position” on the issue of the JCPOA.

Upon arriving in the Russian capital, the top Iranian diplomat said Trump’s January 20 departure from the White House brought along “special circumstances” that required Tehran and Moscow “to coordinate their positions in this regard.”

Addressing the news conference, he said the lifespan of “authentic and friendly” Russo-Iranian “exceeds the entire length of the US’s existence.”

These relations are “independent of others,” he added, and called on the US to stop trying to trouble the ties and interfere in them.

“Our relations are characterized by a strong nature and will grow [even] stronger [in the future],” Zarif said.

He said his visit featured talks on reinforcement of the countries’ ties in the energy and transportation areas as well as “constructive cooperation” in the field of nuclear technology and ways to strengthen this cooperation.

“The countries’ stances are [also] very close to one another concerning many regional and international issues, including [the issues of] Afghanistan, Syria, Yemen, and the Caucuses.”

Lavrov, for his part, said due to the roles of Iran and Russia in the region, “the two states are also interested in expanding a dialog on a number of other issues, such as security in the Persian Gulf, the resolution of the domestic conflict in Afghanistan, and the situation in Nagorno-Karabakh.”

Zarif pointed to a visit earlier on Tuesday by a Taliban delegation to the Islamic Republic, urging cooperation towards the resolution of the problems afflicting the Central Asian nation, which has been enduring decades of militancy fueled by foreign intervention.

He also called for the establishment of a ceasefire and end to bloodshed in Yemen, urging international cooperation and dialog towards resolving the war-battered country’s predicaments.

Concerning the standing differences between Iran and some of the Persian Gulf’s littoral States, Zarif hoped that these countries would choose to deliver an affirmative response to Iran’s offer of negotiation “instead of placing their hope in those who have had no benefit for them at all.”

He was referring to the regional states who have aligned themselves with the US against Iran instead of trying to resolve the regional issues through regional dialog and solutions.

Elsewhere, the Iranian foreign minister expressed gratitude towards Russian President Vladimir Putin for Moscow’s mediation towards the resolution late last year of resumed hostilities between Azerbaijan and Armenia over the disputed Nagorno-Karabakh region.

The crisis was Iran and Russia’s “joint concern,” which was settled through Russian intervention “and has now turned into an opportunity for peace and friendship in the region,” Zarif said.

Zarif arrived in Moscow after paying a visit to Azerbaijan, where he sat down with Azeri President Ilham Aliyev. After Moscow, the tour is to take him to Armenia, Georgia, and Turkey.

The foreign minister said he bore some proposals for cooperation among Iran and the fivefold countries that he would be pursuing during the tour.

He expressed hope that that the Islamic Republic would soon engage in buying the vaccine, and that the countries’ relevant medical facilities would begin cooperating on the vaccine in the near future.

“In the near future, we hope to be able to purchase it, as well as start joint production.”

Earlier this month, the Leader banned the government from importing vaccines from the United States and United Kingdom.