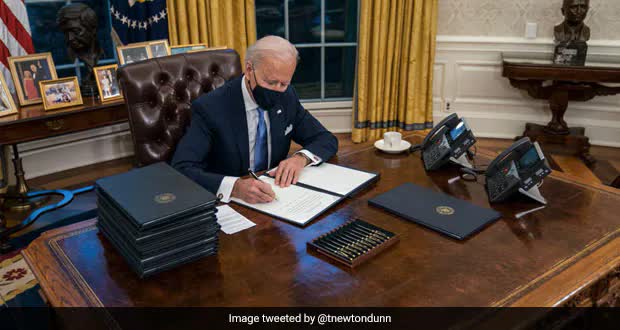 Last week, 78-year-old Joe Biden was sworn as the 46th president of the US. Now that Biden has officially taken his seat in the Oval Office, he has begun to get national and international affairs in order. The White House recently rung up the Kremlin for important discussions.

In a press meeting addressed by Biden, a Fox News reporter by the name of Peter Doocy asked the US president about a call he had with Russian President Vladimir Putin. Doocy’s question came after the White House had already released the details of the call ahead of the said press briefing.

“Mr president, what did you talk to Vladimir Putin about?”, Doocy asked.

“You. He sends his best”, the US president replied before moving on to other questions.

The crowd was left giggling at Biden’s funny response.

Videos from the press conference have since gone viral on social media.

PETER DOOCY: Mr President, what did you talk to Vladimir Putin about?

PRESIDENT BIDEN: You. He sends his best. pic.twitter.com/Fq0zglc9aK

A president with a sense of humor. Love it.

Peter Doocy from Fox News asks Biden what he spoke to Putin about.

​According to the information disclosed by the White House about Biden’s call with Putin, the two presidents have agreed to extend the “New START” nuclear treaty while maintaining “transparent and consistent communication going forward”.