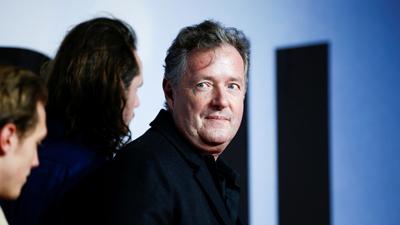 is a journalist, writer, broadcaster and blogger. His award winning blog can be found at www.neilclark66.blogspot.com. He tweets on politics and world affairs @NeilClark66

A daily newspaper has called for the ‘Good Morning Britain’ presenter and lockdown crusader Piers Morgan to stand for prime minister. It’s hard to think of a more inappropriate candidate for the job in the current circumstances.

Where Neil Clark goes in April, the Daily Star follows in January. Back on April 1, 2020 (and, no, it wasn’t an April Fool jest), I actually suggested Piers Morgan should be part of a National Emergency Government of Common Sense Citizens for the Protection of the Public.

Can the UK government of deadly #COVID19 Bunglers please resign before they do any more harm? In their place can I suggest a National Emergency Government of Common Sense Citizens for the Protection of the Public led by @piersmorgan@drbobgill@AllysonPollock & @Johnrashton47 . https://t.co/l8yyWJAQLo

At the time, I honestly thought Morgan was talking a lot of sense. No, I hadn’t been on the ‘sherbet’: I had, though, been influenced by the ‘Project Fear on steroids’ that he and others had been promoting about Covid-19.

Morgan’s line, which he’s never really deviated from since, was that the Tory government was made up of Covid ditherers. A bunch of incompetents who meant well, but who had locked the country down far too late, and were planning to unlock it far too early. To cover up its mistakes, the government was under-counting coronavirus deaths, he said. The situation was much, much worse than we were being told. We were actually facing Armageddon.

That’s basically been his schtick whenever he interrogates a government minister. Paradoxically, however, by failing to bring in the ‘Great Reset’ and the wider agenda, it’s a line of attack that, while appearing tough, has let the government off the hook.

Boris Johnson, as I argued here, played the role of the reluctant lockdowner flirting with ‘herd immunity’ to get the left to support a hard lockdown already planned and comply with the government’s Covid restrictions.

It was very clever reverse psychology, probably designed by Bojo’s Machiavellian strategist Dominic Cummings, and it worked. Piers Morgan, however unwittingly, helped reinforce the official narrative of ‘it’s all incompetence’ that the government, using the virus as an excuse to impose a long-term elite-friendly ‘Great Reset’ of the economy and society, wanted us to believe.

Each time in the spring there were rumours Number 10 was contemplating an easing of restrictions, Morgan was there to oppose. It was always far too early to go ‘back to normal’. When, in the second week of May, Johnson told workers to return to their offices if they couldn’t work from home, Morgan branded the call “unbelievably reckless”. In early July, when the government allowed the pubs to reopen as early as 6am to welcome back customers, he called the move “stupefyingly stupid”. “Does anyone in No 10 have a brain? Or do they want us all to die?” he tweeted.

Reopening Britain’s pubs on a sunny Saturday in July was dumb enough.Letting them open from 6am is stupefyingly stupid.Does anyone at No10 have a brain? Or do they just want us all to die?Serious questions.

But, that same month, despite the dire warnings from Morgan about pubs reopening, on the 30th, deaths with Covid dwindled to zero. It was at around that point, when deaths and cases were at their lowest, and the weather was at its warmest, that the government made face masks mandatory for shoppers. Any journalist worthy of the name should have been questioning the policy and the timing of it. But he’d already posted pictures of himself on Instagram getting a haircut and wearing a mask.

Later in the year, though, that mask slipped. Literally. The TV presenter was photographed in a London taxi not wearing a face covering, and branded himself a ‘Covidiot’. It takes one to know one, Piers old boy.

As 2020 progressed, Morgan’s pronouncements on Covid became increasingly hysterical. The first time I started to regret my own call for him to be in government came on April 7, when he raised the issue of who currently had the authority to issue a nuclear strike while Boris Johnson was in hospital.

Piers: why on earth would anyone have to authorise a nuclear strike? Ludicrous at any time but especially now. https://t.co/yNKPJAItSy

Of course, if there’s a new virus doing the rounds, it makes sense to take reasonable precautions, like it does at the height of every bad flu season, but Morgan overegged it to a ludicrous extent.

His over-the-top utterances brought to mind that wonderfully droll scene in the classic comedy series ‘Dad’s Army’, when Captain Mainwaring instructs his Home Guard platoon to meet up in an old disused mill disguised as Fifth Columnists. Lance Corporal Jones arrives dressed as nun, carrying a rifle. Mainwaring looks up at him, and says, “You’ve gone too far.”

Although he hasn’t turned up for work dressed as nun – or, at least, not yet – Piers Morgan, like Lance Corporal Jones, has gone too far. And while Jones’s catchphrase is “Don’t panic!”, Morgan has done more than his fair share of getting people to panic over coronavirus.

Where is the Prime Minister? His shameful dithering cost so many lives in March. He mustn’t let it happen again. Do something @BorisJohnson – now. https://t.co/dqQhlfNAJi

In November, while England was in another lockdown, he took great umbrage at the idea that rules might be relaxed for Christmas, enabling families and loved ones to enjoy the religious festival together. “I don’t think the entire health of the nation should rest on whether we can gorge on turkey for a couple of days. We have to be selfless,” he declared.

‘I don’t think the entire health of the nation should rest on whether we can gorge on turkey for a couple of days. We have to be selfless.’@piersmorgan asks why the country should be allowed to gather for Xmas when restrictions were not lifted for other religious festivals. pic.twitter.com/W2VEmW7GPh

And what was Morgan’s own idea of being ‘selfless’ over the Christmas break? Flying off to the tropical Caribbean island of Antigua. Conveniently for him, the next national lockdown – which he also called for – began not long after he was back in the country. But of course, the lockdown was still not draconian enough. They never are, for Morgan.

A question for @BorisJohnson: If the new covid variant is 70% more transmissible than the original, and apparently more lethal, why is the current lockdown less draconian than the first? Especially when ICUs are full to bursting & NHS staff are reeling from stress & exhaustion?

It’s hard, if not impossible, to think of a high-profile media figure who has done more to scare people witless over the past 10 months – and make the nation utterly depressed and demoralised – than ‘Piers for Fears’. Just imagine where we might be today if he had instead used his privileged position to challenge lockdowns and highlight the disastrous impact they have on our health, our morale and our economy?