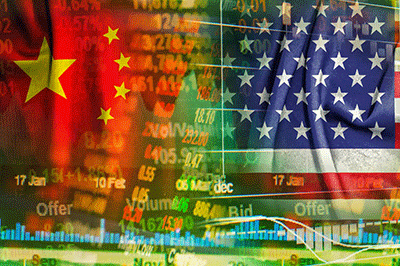 NEW YORK – A 3% plunge in the S&P 500 isn’t frequent. We have had just 24 trading days this bad during the past seven years. It’s noteworthy that it occurred on a day when the US Federal Reserve took pains to declare that it would support the market with security purchases for the indefinite future, and on which no important data was released.

Greed overwhelmed fear, moreover, in parts of the market; market professionals watched drop-jawed as day traders more than doubled the price of a moth-eaten video game retailer, Gamestop, during the Thursday session. A $3.5-billion hedge fund, Maplelane Capital, lost a third of its value shorting Gamestop in January.

What happened was a literal illustration of chaos theory, namely the proverbial butterfly that flapped its wings in Beijing and caused a hurricane in the Caribbean. The Beijing butterfly in this case was the People’s Bank of China (PBOC), which pushed up the benchmark 7-day repo rate to 3.1% from 2.5% on January 25, a significant tightening that was mirrored in banks’ cost of funding.

It may seem crazy for European and US equity investors to cut and run in response to an action by the People’s Bank of China, whose provision of liquidity has no direct impact on Western money markets. That’s what the intraday numbers suggest, however.

The Chinese financial system is walled off from the rest of the world through exchange controls. But every major news outlet in the Western world, from CNN, the Wall Street Journal, Bloomberg, the Financial Times as well as Asia Times, has warned of a stock market bubble during the past week.

The S&P yesterday traded at 30 times trailing earnings, a level reached only once before in its long history, namely at the beginning of 2000, just before a crash that wiped out nearly 60% of the value of the NASDAQ Index.

Investors whose main preoccupation is the imminent pop of the market bubble will not wait until their central bank takes the punchbowl away. It is enough for any major central bank to remove its own punchbowl to produce a minor panic.

The bullish case for stocks depended on the Federal Reserve as a perpetual supplier of liquidity to the market. During the months prior to the spring 2000 stock market crash, the Federal Reserve had pushed its overnight interest rate from 4.75% to a high of 6.5%, before reducing it as the economy sank into recession.

Investors received a 4% coupon on inflation-indexed 10-year Treasuries, compared to negative 1% today. “There is no alternative to stocks” has been the mantra of the market since the Fed and its sister central banks in Europe and Japan pushed real yields deeply into the negative.

What if the Fed tightens, though? The talk in trading rooms isn’t about earnings, or vaccination rates, or stimulus bills so much as it is about the dreadful day when the Federal Reserve will begin to “taper” its massive purchases of US government securities, including $3 trillion during 2020. Real yields will rise and investors will flee equities, in a “taper tantrum.”

The Federal Reserve today went out of its way to reassure the market that it would never, never do such a horrible thing – at least not any time soon. The FOMC’s January statement released early afternoon New York time intoned, “The pace of the recovery in economic activity and employment has moderated in recent months, with weakness concentrated in the sectors most adversely affected by the pandemic.”

And Federal Reserve Chairman Jerome Powell said it would “take some time” before the Federal Reserve reduced its rate of purchase of bonds, now running at $3.6 billion a year.

But trouble always comes from the direction in which you aren’t looking, and the market always does what hurts the most people. The day traders liberated from their brick-and-mortar jobs by the Covid-19 pandemic have become a legion of army ants, swarming into whatever stock Elon Musk might have mentioned in a tweet. Gamestop now has a market capitalization of $24 billion, against projected 2021 earnings of negative $126 million.

There’s no rational calculation involved. The worst-performing members of the S&P 500 today were brick-and-mortar retailers, L Brands and Gap, respectively down 13% and 11% on the day.

One has to ask why the Nasdaq 100 Index should trade at 40 times trailing earnings, and that is the question that investors asked, knocking down Netflix by 7%, China’s JD.com by 7%, and the two biggest semiconductor equipment manufacturers, LAM Research and Applied Materials, by 7% as well.

As noted, China’s central bank can’t be held responsible for investor response to speculative excess in New York, London or Frankfurt. Nonetheless, the knock-on effect of the PBOC’s tightening speaks volumes about the fragility of Western equity valuations.