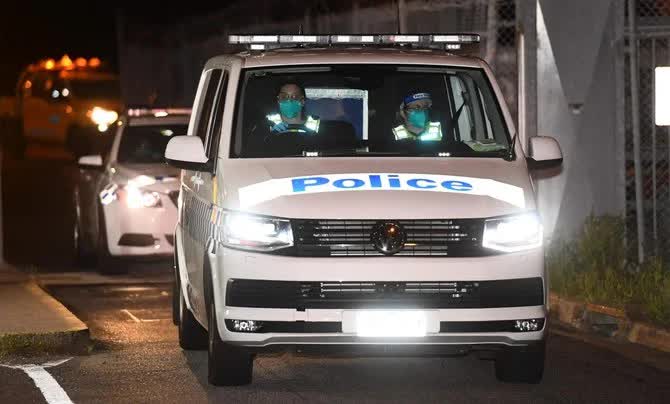 A police van leaves Melbourne Airport as Malka Leifer, a former principal at a Jewish ultra-Orthodox school, is returned to Australia under extradition on Jan. 27, 2021 to face dozens of charges of child sexual assault. (AFP)

MELBOURNE: A former teacher extradited from Israel after a six-year legal battle appeared in an Australian court Thursday to face child sex abuse charges.
Malka Leifer, 54, appeared in Melbourne Magistrates Court by video link from a police station where she is in COVID-19 quarantine.
Wearing a headscarf, she sat with her head in her hands during the 20-minute hearing where the 74 charges against her were read in court for the first time. She did not respond when Magistrate Johanna Metcalf asked if she could see and hear the proceedings.
Guards in the room with Leifer confirmed that the audio-visual link was working.
She previously has maintained her innocence against accusations of sexually abusing several former students at a Jewish school in Melbourne.
The 74 charges include 11 of rape and three of sexually penetrating a child. There were also 47 counts of indecent assault and 13 of committing an indecent act with a child. It was not immediately clear what the maximum penalty would be that she could face.
Her lawyer Tony Hargreaves told the court Leifer had serious mental health issues and asked that she be transferred to prison because the police station did not have the required facilities. She also had strict religious beliefs that required special arrangements in custody, Hargreaves said.
She did not apply for bail and is due to face court again on April 9.
Australia’s Attorney-General Christian Porter had earlier noted her arrival in Australia marked the end of a long legal battle and would relieve her alleged victims. “It is now important that the legal processes are allowed to proceed in Victoria without commentary which could affect that process,” he said in a statement.
The protracted court case and repeated delays over her extradition had drawn criticism from Australian officials as well as the country’s Jewish leaders.
As accusations against her began surfacing in 2008, the Israeli-born Leifer left the school and returned to Israel. The two countries have an extradition treaty, but critics, including Leifer’s accusers, said Israeli authorities had dragged out the case, while Leifer claimed she was mentally unfit to stand trial.
Her alleged crimes occurred between January 2004 and March 2008 in the Melbourne suburb Elsternwick, where the Adass Israel School is based.
The crimes also allegedly occurred in another three Melbourne suburbs as well as the rural towns of Rawson and Blampied in Victoria state, court documents show.
Last year, an Israeli psychiatric panel determined Leifer was lying about her mental condition, setting in motion the extradition. In December, the Supreme Court rejected a final appeal against her extradition, and Israel’s justice minister signed the order to send her to Australia.