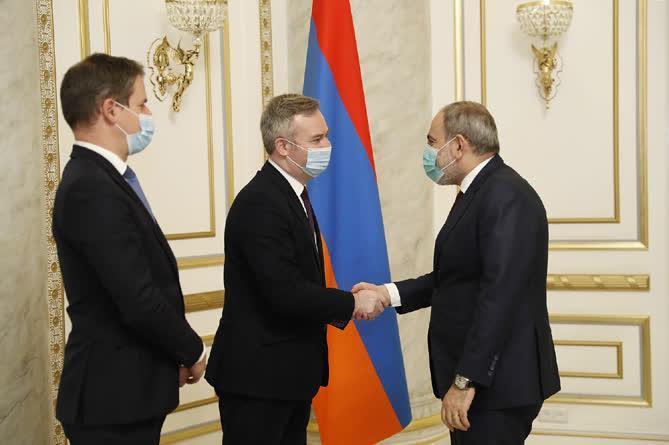 It said after a face-to-face conversation between Pashinyan and Lemoine, the sides continued the talks in an expanded format. Pashinyan was quoted as saying that this meeting reflects the privileged relationship between France and Armenia.

“Our countries have traditionally held a warm dialogue at the highest level, and I want to express our gratitude for the personal involvement of President Macron and Foreign Minister Le Drian in the efforts to stop the war in Nagorno-Karabakh from the first day. Of course, we went through a very difficult war, we have very difficult experiences, we have had many victims, and a very difficult situation has developed. And this visit is very important from the point of view of overcoming the current challenges and using the created opportunities,” Pashinyan said.

Lemoyne, for his part, noted that the French delegation includes representatives of the France’s Depository and the French Development Agency.

“It is very important for our president to be able to respond to each of your needs as quickly as possible,” he said.

According to Lemoyne, now mid-term and long-term economic programs are important.

The sides were said to have discussed a set of issues on developing relations between Armenia and France, including attraction of investments and possible financial assistance.

The parties pointed out such sectors as transport, construction of reservoirs, agriculture, high technologies, digital innovations, digitalization of the public sector, as well as partnership in the development of regional communications where they can cooperate successfully.

In this regard, Pashinyan proposed to consider the possibility of developing a partnership between the Armenian National Interests Fund (ANIF) and the French Development Agency.

Pashinyan also spoke about expanding cooperation in the field of education, one of the successful examples of which is the French University in Armenia. Lemoyne noted that the French side, represented by President Macron, also attaches importance to cooperation in the field of higher education and considers it interesting to continue work in this direction.
An agreement was reached to continue intensive work on projects of mutual interest.