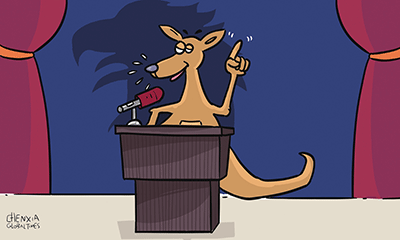 Australia raised concerns about the strategic threats to be posed by a Chinese fishery park project on Daru Island of Papua New Guinea (PNG), but Canberra is expected to gradually accept the fact that China has the ability and right to cooperate with and invest in Pacific island countries.

Both Chinese and PNG officials have voiced their willingness for increased cooperation, according to a statement the Chinese Embassy in PNG released on Wednesday. In a recent post titled “We will not sway” on Facebook, Taboi Awi Yoto, governor for PNG’s Western Province, criticized Australia’s intention to deter the fishery project between China and his country, claiming that Australia wants “us to be subsistence farmers and fishermen and maintain the status quo.”

Apparently, Canberra’s anxiety over the fishery park project is not convincing enough to shake the governor’s resolve to enforce the project. The governor’s defending for the Chinese project highlights the PNG’s own development need for new source of foreign investment, and Australia’s inability to meet the capital needs of its neighbors.

With the world economy hit hard by the COVID-19 pandemic, it is harder than ever for countries to attract investment. While the IMF appears to be more upbeat about the global economy in 2021, expecting a 5.5 percent growth in its latest World Economic Outlook published on Tuesday, the positive growth is based on the economic shrinkage of 3.5 percent in 2020.

Under such circumstances, it is not easy for China to continue the pace of investing abroad after its economy showed a V-shaped recovery, which is the opportunity that cannot be missed for regions that are in urgent need of foreign investment to improve the livelihoods of local people.

It is true that there is a long history of friendship and cooperation between Australia and Pacific island countries, but the latter have the right to attract and use foreign investment based on their own needs, and, Australia is in no position to interfere in commercial projects in its neighboring countries.

The location of the fishery project – which is about 200 kilometers from the Australian mainland – is not the root cause for Australia’s national security concerns, which is in reality derived from its political hostility toward Beijing. If Canberra viewed China as a normal and equal trading partner, it would not be hard for it to see the potential of such projects to be mutually beneficial for Australian investment in the Pacific islands.

Of course, whatever the Morrison government’s skewed views about China, China will adhere to its own agenda and business interest when it comes to investment in the region.

If Australia truly wants PNG to reject the Chinese investment, it should offer an alternative, rather than spewing empty words, to persuade PNG. But it is questionable whether the contracting Australian economy could afford it.

Given the scarcity of foreign investment, it is unrealistic to expect PNG to give up its hard-won investment from China, and Australia’s dubious interference would only complicate its relations with the Pacific island country.