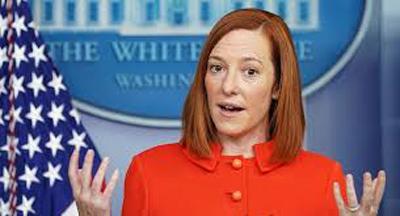 Last week, Twitter users quipped at Jennifer Psaki promising to add to US President Joe Biden’s pledge “to bring transparency and truth back to government”.

White House Press Secretary Jennifer Psaki has again caused a Twitterstorm by expressing hope in a CNN interview that the Democrats will break the rules in a bid to impeach former US President Donald Trump.

“[House of Representatives Judiciary Committee Chairman Jerrold] Nadler is – I hope he’s not following the rules – yes the legal rules, but – we need to be more rule-breakers on the Democratic side, and not play by the game that has always been played because we’re dealing with Donald Trump”, Psaki said.

Netizens immediately berated the White House press secretary for making the remarks, which one Twitter user claimed reflect the Democrats’ drive “to break the law”.

Another netizen insisted that Psaki “has the IQ of a fence post”, while one more user noted that she causes “disgust”.

This proves one major thing, she needs make up.

Breaking the rules, OHHH that’s what the Democrats call breaking the LAW. 2 standards.

she can’t even complete a sentence, just like her boss.

Shameful. The constitution means nothing to the Democratic Party. 💩💩💩😎

Wow!
She really said that😲😨😲😨 pic.twitter.com/iB2bHvrflW

Well I guess they did break the rules big time they fixed an election.

Wow- she should be impeached

She has the IQ of a fence post🤷🏻‍♂️

This comes after Nadler said earlier this month that Trump should be impeached and removed from office “immediately”.

“I am once again urging that the president be impeached and removed from office. We have a limited period of time in which to act. The nation cannot afford a lengthy, drawn out process, and I support bringing articles of impeachment directly to the House floor,” he argued.

The statement followed House Democrats launching impeachment proceedings against the ex-US president over “incitement of insurrection” for the deadly 6 January Capitol riot, which claimed the lives of at least five people. The impeachment article was then delivered to the Senate, with trial arguments expected to begin on 9 February.

Trump, who left the office on 20 January, rejects the accusations, describing his second impeachment as “a hoax” and “a continuation of a witch hunt”.