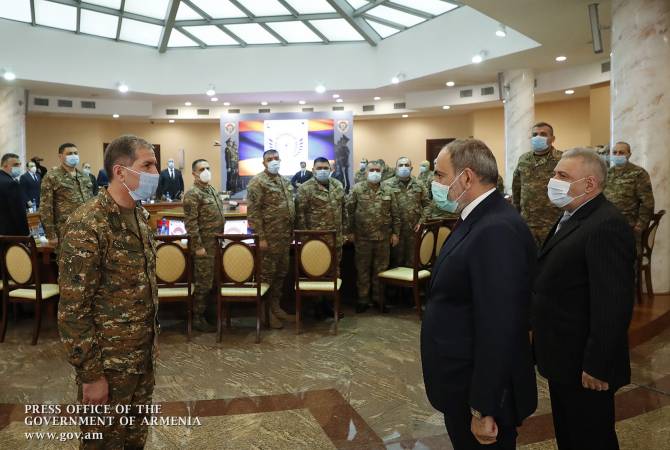 YEREVAN, JANUARY 28, ARMENPRESS. On the occasion of Army Day, Prime Minister Nikol Pashinyan visited the Ministry of Defense headquarters to meet with the military top brass. At the beginning of the meeting, the government and military officials held a moment of silence in honor of the servicemen who sacrificed their lives for the country.

“The Armenian Army, Armenia and Artsakh and the Armenian people are going through a difficult trial related to the 44-day war,” the Prime Minister said in his remarks referring to the 2020 Artsakh War. “In this environment of bitterness we should not forget the heroism that numerous soldiers, officers, generals and volunteers did for their homeland. Today we must worthily appreciate the sacrifices made by our soldiers, officers, generals and volunteers during this war, and we must be able to look into the future. We must be able to look into the future optimistically. We must be able to ask ourselves what it is that we didn’t do right during this period so that our army’s resistibility was higher. These questions must be faced,” Pashinyan said.  He said the military is already looking into the matter to provide answers.

Pashinyan said that the security of Armenia, Artsakh and the Armenian people continues to be absolute priority – just like in the past – and the number one tool of ensuring this security is the Armenian Armed Forces.

Pashinyan went on to speak about the economic impacts on the army and the development of the military.

He said the military bears all the traces of “positive and negative occurrences” that a country goes through, starting from economic activities up to the culture of paying taxes.

“After all, what is our army based on, [it is based on] the means which are collected by the economy, society and citizens and are allocated to ensure the needs of the army through the budget. We must assess this agenda in a new way, we must develop new perceptions and understandings. The modern world doesn’t have a structure where countries have the chance to ensure their security individually. Even the most powerful countries are seeking alliances, forming alliances and are placing their security in the logic of mutual-aid. In this regard Armenia is no exception, and we must continue developing our allied relations with our main security partner Russia. We must continue developing it as part of the CSTO and we must ensure the security of our country and people also through international mechanisms. I’d like to say for the record that in the context of our country’s security what needs to be done is first and foremost up to us,” he said, calling for optimism in building the future security environment of the country.

Pashinyan also felicitated soldiers and officers, veterans, generals and military volunteers whose actions were placed at the foundation of the development of the Armenian Armed Forces. He thanked the troops for their service.