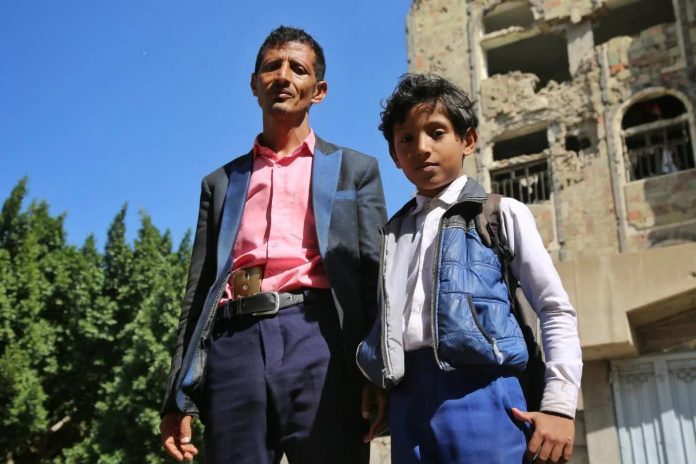 By  MEE correspondent in  Taiz, Yemen

Almost every building is damaged. Dogs bark at anyone walking down the empty streets, and in the distance the sound of children playing in alleyways is interrupted by occasional gunfire.

Carpets are hung between buildings – not to dry, but to protect passersby from snipers.

These are the frontlines of Taiz, a war-wracked city in southern Yemen where terror follows its long-suffering residents.

Most Yemenis have fled the homes that now lie between the pro-government forces and Houthi fighters. But some remain – either refusing to abandon their houses and live in displacement, or simply lacking any alternative shelter.

Middle East Eye meets the Yemenis living and suffering on the frontline.

Adel al-Hammadi: ‘We hoped to see even just a bird’

Hammadi is a resident in Taiz’s Bazara’a neighborhood in his 40s. He was stuck in his home for 11 days during fighting.

“The fighting has been ongoing in this area since 2015 and I have witnessed it more than once. One day, fierce clashes broke out in the neighborhood: the Houthis were in front of our house and the resistance [pro-government] forces behind it, so we were stuck at home.

‘When he saw we were still alive, he couldn’t believe it, as everyone thought we’d been killed’

“We were under siege for 11 days, unable to leave the house at all. If we left home we would be condemning ourselves to death. We hoped to see even just a bird.

“We depend on purchasing food on a daily basis and don’t have food stocks at home like other families. So during the siege we had nothing at home to eat and we couldn’t leave to get food. We had wheat flour that we give to the goats, so we resorted to cooking and eat that.

“That was our only food for 11 days. We didn’t have water, but we were lucky that it was the rainy season and we could gather rainwater in jerry cans, which helped us survive.

“The 11 days were full of suffering. There was no sound other than the sounds of clashes and shelling. We couldn’t sleep, the children were really terrified but I was trying to calm them and tell them the fighting was far away and it wouldn’t arrive here.

“After 11 days, the clashes calmed down and a friend came to my home shouting out for us. When he saw we were still alive, he couldn’t believe it, as everyone thought we’d been killed. Even the fighters in the area said they were surprised to see us alive, wondering how we survived.”

‘I lost my son and my only source of income. I lost happiness and a peaceful life’

Hajj is a father of four children, two sons and two daughters. One of his sons was killed in the fighting. Hajj, who is in his 40s, used to work as a shopkeeper but now is unemployed.

“I’m a resident in the al-Saeila area of Taiz city. I opened a small shop on the ground floor of my home to eke out a living for my family. In 2016, fighting was ongoing near our area and shelling was falling on residential areas. Shells are still falling today.

“On 8 August 2016, my eldest son Abdullah, 13, was at the shop and I was asleep when I heard shelling fall near to us. I felt it fall on my son and ran outside the home shouting for Abdullah.

‘Abdullah replied to me as dust swirled around, saying ‘father, don’t worry I’m fine’ and then I saw his intestines were hanging out of his body’

“Abdullah replied to me as dust swirled around, saying ‘father, don’t worry I’m fine’ and then I saw his intestines were hanging out of his body. But I didn’t realise that he would die because he was still speaking. I took him to the hospital and he was speaking on the way, trying to calm me and repeating ‘don’t worry, I’m fine’.

“When we arrived the hospital, doctors took him to the operation room and he passed away there.

“Since that day, I’ve been scared and feel frustrated. It isn’t easy to lose your son and see him dying in front of your eyes. I’m still living in the same home with my wife and three children, and we don’t have shelter in a safer area.

“The shelling destroyed the shop and I’m unemployed now. Nothing is left in the shop but bad memories. I lost my son and my only source of income. I lost happiness and a peaceful life.”

‘Life can’t be like it was, because there are landmines in the area’

Mukhtar is the brother of Ahmed, a 14-year-old shepherd who lost his leg to a landmine.

“My brother Ahmed used to graze sheep with other children in the mountains, like many people in our village. The village was caught up in fighting, and they were difficult days, but eventually it moved on and so did we.

“Doctors amputated his leg from over the knee to keep the rest of the body safe, and there are still pieces of shrapnel from the landmine in his body. It was a difficult moment, we weren’t sure if Ahmed would survive or not.

“Ahmed remained on his back at home for five months and then gradually started to walk with the help of crutches. He is still suffering from the shrapnel.

“After Ahmed’s incident, a team from the improvised explosive device disposal squad came to the mountain and the village and cleared many landmines.

“They found landmines inside homes, on the mountain, on the roads and in residential areas, as the area was a frontline. The landmines leave permanent disabilities, like what happened to Ahmed, and they have many victims in Taiz. Landmines are still a threat.”

‘The fighting is terrifying. We feel we will meet our fate at any moment’

Ghalib, 35, used to travel to Saudi Arabia for work, but since the beginning of the war he is has been based in Taiz with his family.

“Like many other neighbourhoods in Taiz city, this one witnessed fighting and clashes around many houses. There were door-to-door clashes, and many were killed and wounded here. The fighting is terrifying. We feel we will meet our fate at any moment. Imagine what it is like being trapped in your home while there are clashes in the yard outside.

‘We are witnessing bad days and our families are terrified’

“No one dares to leave his home, especially after sunset. We can usually avoid fighting by staying in the basement, but it is very difficult to avoid the snipers. The snipers always shoot at the neighbourhood and many people have been killed by them. We tried many ways to protect ourselves from the shots, but it is difficult.

“The children can’t go out to play normally, and when we enter or leave our homes, we walk near the walls where snipers can’t see us. We resort to hanging wooden panels, carpets, blankets, plastic sheets or mattresses, so the snipers can’t see us. But they shoot the covers and tear them, so we have to replace them.

“If there is a light at night, the sniper immediately shoots at it, even if it is a cigarette, so we don’t light anything and we have shut all windows. One day last Ramadan, a sniper shot a motorcycle biker here in front of us. Immediately he fell down from his motorcycle and died.

“We are witnessing bad days and our families are terrified. They don’t want to live in such areas, but there is nothing we can do and we must struggle to adapt to the life here. I hope that coming years won’t be like the last ones.”