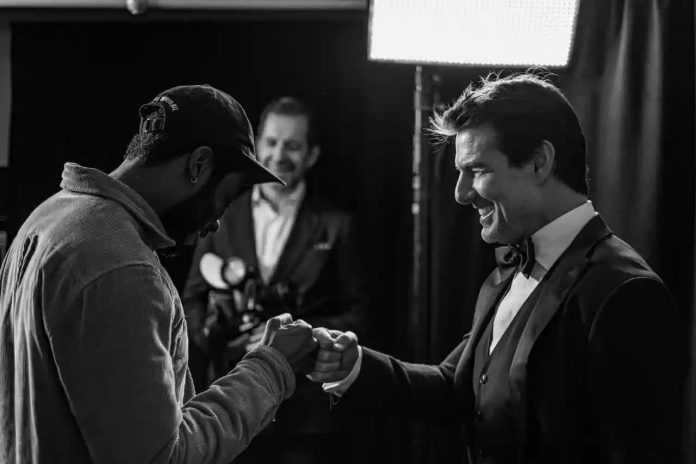 The Guardian -Interview by Amy Fleming

I was given the winners room at the British Fashion awards in December 2019, which is the holy grail for photographers at an event like that. All of the winners and icons present at the evening are ushered in for a one-on-one shoot with the official photographer. Giorgio Armani won the outstanding achievement award and he had some friends come down to support him, including Cate Blanchett, Julia Roberts and a certain Mr Tom Cruise.

This picture is of film-maker Cornelius Walker with Tom Cruise. Cornelius is a brilliant young talent from London who I came across after his Guardian-commissioned documentary Black Sheep was nominated for an Oscar earlier that year. It was extraordinary, given this was his first production, but I worried about the system that he is having to function in, and that his talent might never reach the heights that it should.

I invited Cornelius to the Fashion awards as my assistant so he could experience the evening with me and have the chance to meet interesting people. I wanted to wheel him out in front of any of the A-listers that would give us mere mortals the time of day. I have struggled my whole life with impostor syndrome. It’s taken me four decades to realise that I’m halfway decent at some of the things I do. So now I want to get to people early enough to let them know that the only failure is not to try.

We’d just finished setting up when Tom Cruise appeared. I walked over and I said: “Listen, Tom, this kid over here just got nominated for an Oscar.” Tom came over taking a genuine interest saying: “Tell me who you are, what do you want to get out of the industry?”

I stepped back and took a few shots as Tom was telling Cornelius that he couldn’t wait to be in his movie one day. Not only did Cornelius deserve to be in the room, but the room is lucky to have him in there. And something about Tom Cruise’s sensibility told me that Tom knew that, too.

I’ve only been doing photography for three years, but my eye has been in training from a young age. I have always buried myself in books, songs and films, and obsessed over composers, directors, singers, actors, anyone that created anything. I didn’t think I myself could create until my (now) wife encouraged me.

I went to private school, so I have one foot in that privileged world

When you first look at a camera, you don’t know what the hell to do with it. I’m dyslexic, and I think dyslexic people are used to figuring out how to make things work for them. I went out and started shooting whatever I could to develop my style, and anything technical that I didn’t understand, I asked the internet. I still have a long way to go, of course, and I’m going to keep trying to be the best storyteller with a camera as I possibly can.

If you look now at the covers of glossy magazines and beyond, there’s more diversity than ever. Hopefully a lot of those people are being shot by black and Asian people, because I’m certainly not the first person that looks the way I do to hold a camera. One of my idols, Charlie Phillips, was documenting the Notting Hill carnival and the area around Ladbroke Grove before I was born. His archive is extraordinary and he should be celebrated. He is no less talented than Norman Parkinson, Cecil Beaton or Irving Penn.

I went to private school in England, and so I have one foot in that privileged world, but the other foot as a black man. I know what it means to be othered, but I also know the nepotistic world of access that being in a certain socioeconomic bracket can give you. Understanding both of those, I now force the issue when it comes to giving other people chances.

High point: “The messages I get from strangers who, seeing my story, are not afraid to try new career paths.”

Top tip: “Watch every documentary about great photographers that you can find before you even hold the camera. Learn about the history of the still image first.”